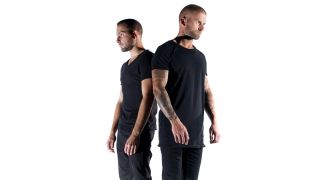 Gaist: "Finding a nice kick to drive our track is pretty much the first thing we do every single time."

UK techno duo Gaist (Stu Allan and Adam Wagstaff) have been getting the attention of some of the scene's biggest names recently, with their music featuring in sets by the likes of Richie Hawtin and Pig&Dan.

Not only that, but Gaist have also created a sample pack, Raw Techno, which is available now on Loopmasters.

Now they're turning teacher, as they offer you the benefit of their experience and list 10 dos and don'ts to consider when you're starting a track…

Do... enter the studio with the right attitude

"If your heart isn't in it then the music won't be your best. Find something that makes you want to create. It can be a track you heard, a new plugin that you can't wait to try or a new synth you just bought. Go into your creative space and have fun! That's the fundamental starting point for all of our productions."

"Analogue equipment and keyboards racked up all over the place is great, but not essential. You can produce great music on your laptop using free software and a set of headphones sitting on a bus! While all the big expensive toys look and feel great, you don't NEED them. We know plenty of producers who write on the go while touring. (Mixing and mastering, though - that's a totally different ball game. Don't try that on a bus.)

Do... fully understand your equipment

"There's a reason why the phrase "all the gear, no idea" exists! Don't get frustrated with an analogue synth because you can't get the sound you want out of it, for instance. It may only need those few knobs setting differently. Don't be ashamed of reading the instructions - at the end of the day that's what they are there for."

Don't... focus on too much at once

"Find a sound that you like and work with it. For us, the percussion always comes first. Finding a nice kick to drive our track is pretty much the first thing we do every single time. Don't spend hours trawling through libraries, though; find a sound that you like and make it your own. Every kick we have ever produced has evolved as the track takes shape, so don't waste valuable creative time auditioning kicks - just get one down and work on it!"

Do... set yourself some goals

"Even if you are just heading into the studio to play with that new Moog you just bought or to put the finishing touches on a remix, go in there with an aim to achieve a goal. Set yourself a target and work towards it.

"It doesn't necessarily need to be a time-based target - usually this is a bad idea. Putting time constraints on being creative can often lead to poor production. So keep the goals real and say to yourself: 'Right, I'm going to get this kick to work with this bass before I'm done this morning'. Keeping the goals achievable will increase productivity and your work will move along at pace."

Don't... think that the more parts that are in your track, the better it will sound - It won't!

"Keep it simple and tight, so all your parts have the space they need. Shoehorning parts into a project will only make it sound hectic, and the true essence of the track could be missed. Simplicity is key."

Do... prioritise your time

"Learn to know what's working and what isn't. You can spend an hour working on layering that synth, but is it really what the project needs? Unless you are a machine you are eventually going to get tired, so don't waste all of that creative energy.

Getting the right parts nailed will help the project move forwards and will in turn keep your focus and enthusiasm. Taking regular breaks will really help, as production is tiring, It's surprising how a short break can give you a different perspective on your track when you come back to it."

Don't... undervalue the importance of a second opinion

"A fresh set of ears listening to your project can be priceless. Producer and DJ friends can offer some of the best advice as they know what is working out there.

"Encourage them to be honest. Having a friend say 'Yeah, nice that mate' isn't helpful; pointing out that your snare is miles out of key and ruining the percussion is a bitter pill to swallow, but in the end a valid and constructive piece of feedback. Take everything on board, but remember that this is your track and it needs to sound how you want it to."

"If you are writing a track for a specific label or trying to get a particular DJ to play your music, listen to tracks that are already signed to your dream label over and over. Understand what makes them so good. Listen to all the details. Work on similar sounds. Don't just create carbon copies, though, as this won't work; always remember to make your work represent you and don't try to be someone else."

"Sometimes it will feel like you're banging your head against a brick wall, but push through. Take a break and give your ears time to rest - they get more tired than you think.

"Even if you have to come back to the project the next day, always give every project the time it needs to be finished. We have worked on tracks that have been completed in days, and then others that have been ongoing for months. Never discard the track; keep it, as it may contain elements that could be used in other projects."