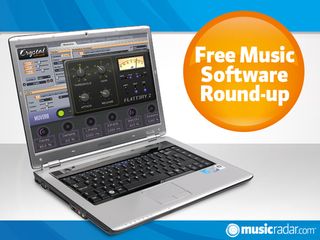 We've lost count of the number of free plug-ins and other music-making software trinkets we've told you about in 2010, so let's just settle for saying that it's 'a lot'. We round out the year with three more: see you in 2011.

You may know Mutools from its free or affordable (depending on which version you choose) Mu.Lab DAW, but it's now released this "very nice sounding" reverb plug-in. MuVerb is described as a 'test version' at the moment, so the CPU-use may be a bit high, but more development is planned.

A second version of the "gentle squashy" bus compressor. This update adds a slightly gentler transfer curve, tweaked attack and release smoothing, a new peak sensing mode and external sidechain inputs. Oh, and although it's a bus compressor, you can use it on channels as well.

MusicRadar users' second favourite free VST plug-in in the world today doesn't get updated very often, but a recent tweak means that this multi-skilled synth (it supports subtractive, FM, granular and other tone generating methods) is now a 64-bit plug-on both Windows and OS X. There's also a new iOS version, but that's another story…