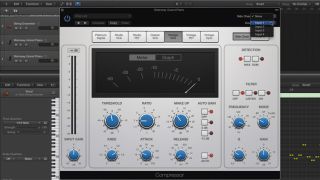 The sidechain inputs on your plugins can be incredibly useful.

Give us five minutes and we'll give you… five essential plugin-related tips! Read on for the bite-sized low-down on plugin wrappers, sidechaining, performing live with virtual instruments and effects and more.

For more advice and 24 videos on using plugins, get the full CM Guide to Plugins with issue 217 of Computer Music, which is on sale now.

The plugin wrapper has been around almost from the very first days of plugins, offering a way to load, say, VST plugins into an AU-only host. FXpansion will still sell you an adapter to facilitate the use of VST plugins in the fading number of RTAS hosts. DDMF's Metaplugin, meanwhile, is a VST/VST3/AU/AAX/RTAS plugin that itself can load other VST/VST3/AU plugins, thus enabling you to use VSTs in Logic Pro X, for example.

More importantly, wrappers can be used to load 32-bit plugins into 64-bit hosts. Many a Logic user was flummoxed by Logic Pro X's exclusion of 32-bit plugins, but thanks to 32 Lives ($99), it's not the end of the world. Similarly, jBridge (€15) is a cross-platform option that allows 64-bit plugins to be used in 32-bit hosts, assuming, of course, your OS supports 64-bit applications.

As well as plugin effects and instruments, there exists another type of plugin recognised by some hosts: the MIDI plugin. These work like their audio effects counterparts except that they open in MIDI and instrument tracks, processing MIDI data. You can find all sorts of freeware and paid-for MIDI plugins, such as arpeggiators, MIDI delay lines and quantisers. Among the most useful are those that enable you to convert one type of MIDI message into another: you might convert aftertouch messages into breath controller data to be read by a woodwind instrument plugin, for example.

Many effects plugins provide sidechain inputs, traditionally by making these inputs available as destinations among a DAW's routing options. It's an incredibly useful tool, if slightly fiddly to set up, so consult your DAW's manual for the lowdown on how to do it. You can often make life easier by using your DAW's built-in plugins, which usually simplify routing of the sidechain signal, or by using VST3 plugins, which also offer simplified routing setup.

If you're planning to collaborate with other desktop musos, it would be wise to consider the plugin formats available to all involved parties. Is there one particular plugin format available to both? If you're using Ableton Live on a Mac, for example, you'd be best off avoiding AU plugins and instead using VSTs when collaborating with a Live user that makes music on a Windows machine, since they won't be able to load AUs. Even if you can't swap projects due to using different DAWs, you can still potentially transfer plugin settings by sharing presets, and again, this is generally made simpler by sticking to the same formats where possible.

For some users, a fully kitted-out DAW is overkill. Many live performers need only a simple host to load plugin instruments that can be played in real time from a MIDI keyboard, or effects through which they can route signals such as guitars, vocals and more. For those users, there are simple hosts such as Hermann Seib's free VSTHost and Apple's MainStage (£22.99).