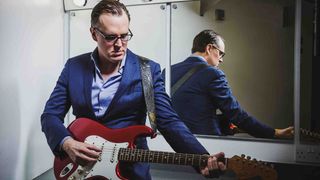 An important lesson of music history is that nothing ever moves in a neat, linear fashion. One movement might largely lead to another, but people are always absorbing ideas from further back or from other cultures.

Blues is a classic case. It's an American tradition with a long history reaching back to African slavery. In turn, American blues went onto influence the rest of us. But in the '60s, hip young American bluesers were heavily influenced by young middle-class men from the Home Counties of England, who had mostly only heard the blues via imported records and crackly AM radio stations!

There's no doubting the massive influence of Clapton, Beck, Green and Page, but the story illustrates how history moves in mysterious ways. And so we arrive at one of the great guitar heroes of the 21st century: Joe Bonamassa, who plays us through some of his favourite English-style blues licks on video here, with tab and audio examples below.

Joe starts with a smooth line using A minor pentatonic (A C D E G) based largely around the 12th fret position. This kind of line, with the smooth position change via that E-D slide, is very reminiscent of Eric Clapton's 'Beano' period.

Expanding on that theme, Joe extends the line down into the 5th position box shape. To create melodic variety in your solos, it's important not only to learn multiple scale shapes, but also to move smoothly between them.

With Cream, Eric Clapton's style evolved beyond his original Chicago blues influences. The band had much more of an improvisational style, and Eric's phrases became longer, freer and typical of the 'raga' flavour that was predominant in so much rock music of the time.

Like Example 3, this one is based largely around E minor pentatonic (E G A B D), but it will also work in an E major blues tonality. Note the G to G# bend at the start of bar 3 - Eric frequently mixed minor pentatonic and Mixolydian (E F# G# A B C# D).

Joe was also heavily influenced by other British players. In this lick, using F# minor pentatonic (F# A B C# E), he demonstrates the more aggressive and more sonically varied approach of Jeff Beck's Yardbirds era.

Of the three, Jimmy Page is probably best known for his faster flurries of notes and, like Peter Green, for his love of the minor-key blues. This lick uses C minor pentatonic (C Eb F G Bb); note the Cm arpeggios in bar 3.