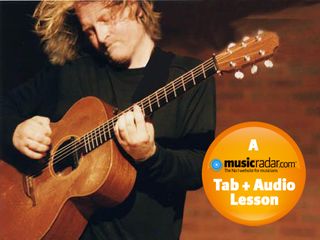 Eric Roche was a pioneer of modern acoustic guitar

Classically trained and initially influenced by guitarists such as Michael Hedges and Preston Reed, Eric Roche developed a very personal guitar style which featured driving percussion and 'extended' techniques such as two-handed tapping (still quite unusual on acoustic guitar at the time when he was pioneering his style) and the use of artificial harmonics.

Eric's music was always melodic and composed - in essence he wrote music rather than 'exercises', which is always a potential pitfall with any style that's built on specific techniques or stylistic traits.

Beyond his dextrous fretboard (and 'rest of the guitar') skills, his personable nature and compositional flair, it was his live work that set Eric apart from the crowd, with a huge tone that engulfed every concert hall he performed in.

It's also worth noting that whilst Eric was highly proficient in percussion techniques, tapping and all the other styles we consider as 'modern', he was also a master of conventional fingerpicking.

It's best to view this piece as three lessons in one. The first part examines the tapping as an accompaniment approach - the fretting hand keeps a hypnotic hammer-on and pull-off sequence whilst the picking hand taps out the accompanying bass notes.

The next section combines fretting hand tapping and percussion and picking hand slapped and tapped harmonics. The percussive part (the muted 'x's) can be played anywhere on the body but we'd recommend the upper bout to start off with.

For example, you can hammer on the 3rd fret of the fifth and sixth strings with the fretting hand fingers then quickly move the same hand over to the upper bout of your guitar (basically where the neck joins the body) and then slap the guitar for the percussive effect. Experiment and you'll soon find the areas of the body that work best for you, and the wildly different tones that each one elicits.

Finally, there's a simpler section where you maintain a hammer-on and pull-off sequence whilst tapping out a rhythm on the upper bout of the guitar, this time with the nails on the picking hand for an almost 'castanets' tone. It was an honour for us to count Eric as a friend, mentor and inspiration. He may have gone but neither he nor his music will be forgotten.

Next page: guitar tab for the audio example

[Bar 1] Here is a repetitive hammer-on/pull-off figure. Start slowly and work on stamina and clarity. Ideally you want to be able to keep this going for a couple of minutes without feeling fatigue in your fingers.

[Bar 3] With your picking hand you can now tap out accompanying bass notes but watch out that these don't overshadow the melody on the top strings. I've kept this fairly simple but you may want to try adding some extra bass notes in each bar.

[Bar 9] There's a slight change in the melody so be sure that you can move the fingers in time whilst paying attention to the shifting bass notes.

[Bar 19] This is where the fun begins! There are fretting hand hammer-ons (on the 5th and 6th strings), tapped/slapped harmonics with the picking hand and a percussive 'thwack' on the body of the guitar with the fretting hand. Work on it slowly, building up coordination, speed and accuracy.

The fretting hand has to travel a fair distance from the strings on the 3rd fret to the upper bout of the guitar for the percussive 'thwack'.

[Bar 23] Here's a reversal of the previous pattern. You now start the bar with percussion rather than the hammer-ons on the bass strings.

[Bar 26] Finally, here's a simple bass line accompanied by some percussion. Tap the fretting hand nails on the upper bout of the guitar on beats 2 and 4 whilst the fretting hand sounds the riff on the sixth string for that pseudo 'castanets' or 'timbale' sound..