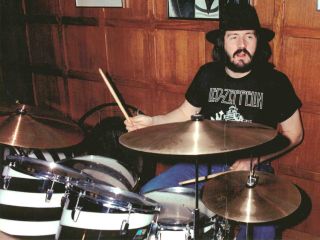 Bonham's sound was rooted in the big band drummers of earlier decades. His set-up mirrored that of Buddy Rich, with a tall bass drum, single top tom and two floors. One of the few rock drummers Bonzo admired was Carmine Appice and, fortuitously, he met Carmine on Zep's first American tour in 1968.

This would remain his standard set-up until the late '70s. His final two kits, a Sparkle Silver and a stainless steel Ludwig, had larger 15" top toms. John always played a 14"x61/2" Supraphonic 402 'Ludalloy' snare, even with his 1973 Amber Vistalite kit.

As for cymbals, he stayed with Paiste throughout, starting with Big Beats and moving on to 2002s. His ride was a monster 24" and his 15" Sound Edge hi-hats were also quite large. His crashes were smaller and faster - usually a 16" and 18" - although at times these were augmented with a second 18" and/or a 20".

He had a Paiste gong suspended behind him and he incorporated congas, cowbell and later on, two Ludwig timpani.

Bonham's power was legendary. His longest serving roadie/tech Mick Hinton says, "We had a riser with holes drilled for the tom legs, spurs and hi-hat to slot into. Ludwig drilled holes in the front bass drum hoop so I could anchor the bass drum.

It was always the 14"x61/2" metal snare with Gretsch 42 strand snare. There was no damping in the bass drum, just a Dr Scholl's moleskin patch. John's great thing was the snare drum which had to be spot on, so he tuned it himself and I tuned the rest. The bottom heads were quite tight and the tops were slacker. But his sound was the way he played - it was nothing to do with me."

Liked this? Then try:
Drum techniques: bass drum ergonomics
100 greatest drum beats of all time
The 17 most outrageous drum kits on the internet