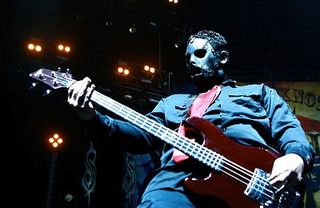 Total Guitar is saddened to hear that Slipknot bassist Paul Gray has died.

According to reports from local police, the 38 year old's body was found by an employee at the TownePlace Suites hotel in his home town of Des Moines, Iowa.

At the time of writing, police were carrying out an autopsy and the cause of death is still to be declared, but authorities are not treating it as suspicious.

Gray was a bassist who favoured playing with feel over technique, and was an integral part of the nine-piece band.

Along with percussionist Shawn Crahan, Gray was a member of the band's earliest incarnation, Painface, formed in 1992. Later, when guitarist Joey Jordison joined, the group became The Pale Ones and eventually were eventually renamed Slipknot in 1995.

In August 2008, Slipknot released their fourth album 'All Hope Is Gone', with first single from that album, 'Psychosocial', winning Solo Of The Year and Best Video in TG's 2008 Reader Awards.

The band have since been touring the record around the world, as well as focusing on various other side-projects, including vocalist Corey Taylor and guitarist Jim Root's band, Stone Sour, who have an album out later this summer.