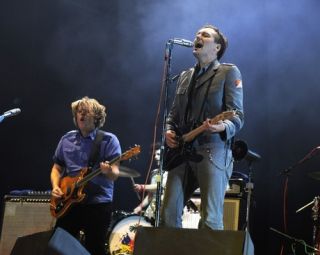 The second day of music at the festival saw the best weather of the weekend and a ripening crowd. TG caught sets from Mystery Jets, Gallows and Gaslight Anthem, to name a few.

Arriving on site a tad later than the previous day (a Saturday is still a Saturday!), TG sadly missed Radio One stage openers Rolo Tomassi, but caught the excellent Everything Everything. Finally transcending their 'word-of-mouth hit' status, the stereotype-busting Manchester post-punk group have reached a tipping point and the large crowd they drew valiantly attempted to sing along to their mind-altering falsetto pop.

Later, on the main stage, Mystery Jets deftly handled a large and varied audience and got the day well under way. Guitarists Will Rees and Blaine Harrison shared front-man duties and the group resisted the temptation to draw solely from their excellent new album, 'Serotonin'. Still, we would have liked to have heard 'Dreaming Of Another World'.

Up next were New Jersey's finest, The Gaslight Anthem. Making their main stage debut the group looked a little lost and struggled to fill the space somewhat, resulting in an unremarkable set. Few can compete with the band's own headline shows though.

Later in the day TG witnessed Gallows' 'secret set' as The Rats on the Lock Up stage. The Carter's and company were in explosive form and various feats of bravery/madness included a guy in a wheelchair crowd-surfing, Lags throwing his guitar at an over-zealous security guy, a circle pit that was easily half the size of the tent and a wall of death reminiscent of the opening sequence of 'Gangs Of New York'. It was truly awesome.

Later that evening, things were left in the surprisingly capable hands of the reformed Libertines and indie-saviours The Arcade Fire. But frankly, following their treatment by Axl Rose the previous evening, they could have put a piano-playing squirrel up there and the audience would have loved it - providing that it was punctual.