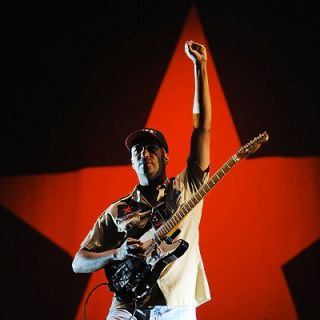 Day two of Download 2010 proved to be a much busier affair, with bands kicking off four hours earlier than on the Friday. TG faves included Deftones, Cancer Bats and, of course, Rage Against The Machine.

Thanks to a hectic press schedule TG finally kicked off day two of Download festival with a trip to the second stage, which, by the way, takes so long you need to carry emergency rations (the site truly is massive). Hitting the stage around lunch time Rolo Tomassi delivered the energetic show they've become famous for, with front woman Eva Spence more than singing for her supper.

Later, on the same stage, Cancer Bats drew a sizeable and devoted crowd. As expected, everyone went suitably mental for their cover of 'Sabotage' and Scott Middleton's crushing riffs went across well with the Download crowd. They were also one of the only bands so far to have the audience chanting their name between songs. Canada's new hardcore heroes must have done something right on their recent second album 'Bears, Mayors, Scraps And Bones'.

As the evening drew in Deftones took to the main stage for a blinding set, which mixed cuts from classic albums 'White Pony' and 'Around The Fur', alongside new material drawn from 'Diamond Eyes'. Stef Carpenter was hammered away on a variety of guitars, including his signature eight-string ESP, which we got to take a close look at earlier in the day. (We were smug too).

The Saturday night headliners came in the form of Rage Against The Machine. Pre-gig anticipation was high from crowd and press alike and as the band were 20 minutes late for their set, bottles began to fly. We later learnt that the delay was due to the considerable risk of front row audience members getting crushed, so fair enough.

When Rage did eventually make it on stage the audience quickly got into the set, something encouraged by the absolutely ferocious energy that the band are still able to conjure up. Having only three (four-ish) albums to pull material from meant that every song was greeted with a raw of recognition and particular highlights, included 'Bombtrack', 'Sleep Now In The Fire', 'Know Your Enemy', a cover of The Clash's 'White Riot' and, of course, closer 'Killing In The Name'.

Tom Morello proved he's still an astonishing guitarist and the guitar cable solo on 'Bombtrack' was a particular highlight. The group worked incredibly hard as a unit too and those fortunate enough to have witnessed both bands felt they had outdone even AC/DC.