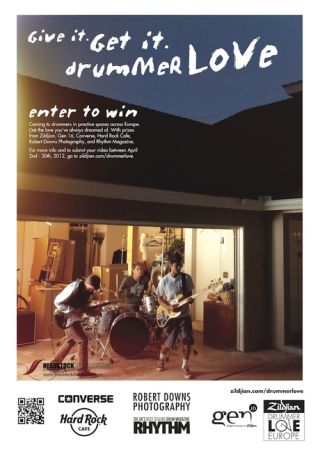 Zildjian's Drummer Love talent competition took the US by storm in 2011, and in April it will be coming to the UK, Ireland and Europe.

Drummer Love Europe officially kicks off on 2 April 2012 and runs through until 30 April, 2012. During that time, drummers from the UK, Ireland, France, Germany, Spain and Russia may visit Zildjian.com/drummerlove to upload a video link of their playing, alone or with a band, and submit a short story describing why they love to play Zildjian cymbals or would love to play Zildjian cymbals.

Zildjian, assisted by star judges Gavin Harrison, Manu Katche and Simon Phillips, will then narrow the entrants down to just two finalists from each region. Then, ultimate winners will be determined by the public who can cast their votes at Zildjian.com/drummerlove.

As well as the recognition of being crowned as Drummer Love winner for their region, the six drummers will also receive prizes from sponsors Converse and Hard Rock Café and a professional photo shoot with renowned photographer Robert Downs.

The shots of the winning drummers in both the UK and Ireland categories will then be featured as part of an interview, as well as a Zildjian advertisement, in Rhythm later this year. Of course, the triumphant drummers will also win a load of Zildjian gear, including cymbals, sticks and Gen-16 products.

If you want to be part of Zildjian's 'Love-in' Visit Zildjian.com/drummerlove for all the details.