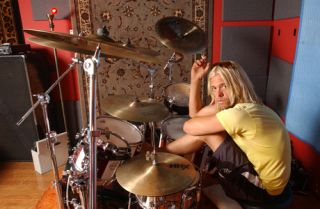 Andy Copping, Download Festival's booking head honcho, has announced through Twitter that Taylor Hawkins and the Coattail Riders will appear at this year's festival.

The band's website has confirmed they will play on 11 June.

Hang on, isn't that also the day that Taylor's Foo Fighters buddy Dave Grohl is on site with Them Crooked Vultures?

Does this blow the door wide open for all kinds of mouth-watering collaborations between the two at Download?

After Taylor's recent guest star-laden Coattail Riders show in London, at which he was joined by Queen legends Roger Taylor and Brian May, we're pretty excited about what the day could bring.