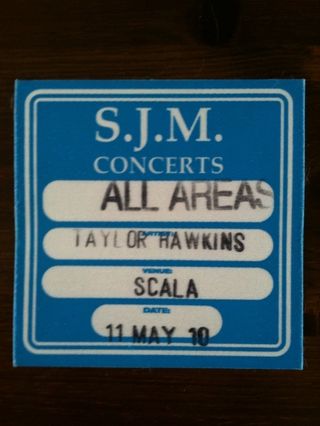 We've been aware of Taylor Hawkins' 'other' band the Coattail Riders for a few years now and when we received the band's new album Red Light Fever last month we really took notice. It's a blinding medley of Taylor's biggest rock influences, notably Queen, the exceptional drumming we all know him for, and an unexpected but phenomenal rock voice. Check out this video of him performing on Jimmy Kimmel to see what we mean.

The stench of anticipation was strong in the nostrils as we approached the Scala venue in central London for the band's first UK show, to be greeted by an eager line of Foo Fighters fans. Inside the venue is intimate to say the least, offering a rare chance to see Hawkins' playing up-close. The first thing we noticed on looking to the stage was Taylor's sparkling Gretsch sitting right at the front. Another huge kit sat beneath a large black cloth at the back of the stage, but more on that later...

The Coattail Riders came on stage to mass applause (the biggest reserved for Taylor) and burst straight into the tumultuous intro to album opener 'Not Bad Luck'. The sound was spot on, the Gretsch tuned perfectly and Taylor's voice suitably penetrating. With a mix of old and new songs the set highlighted Taylor's songwriting ability and his expert grasp of writing beats to fit a song. He channelled Don Henley with his singing drummer approach and pulled each lick and line out of the bag with consummate ease and with buckets of soul. It's rare these days to hear a rock vocal of such calibre.

For the drum fans in the audience, of which there were obviously a few, he even managed to throw a quick but impressive drum solo into the mix.

From about halfway through the show things got a little crazy. First of all Taylor invited Chris Squire from Yes on stage to handle bass duties for a rocky run through of the Foo's Hawkins-fronted 'Cold Day In The Sun', to which the crowd reaction was suitably rabid.

It's a well-documented fact that Taylor Hawkins LOVES Queen. He interviewed Roger Taylor for a special Guest Editor issue of Rhythm back in 2005, so it was with a huge grin on his face that Taylor introduced Roger Taylor, his son Rufus (also a great player, naturally), and Brian May to the stage as a Ludwig kit was uncovered at the back. The crowd went wild as the 'supergroup' worked through a string of classic early Queen songs (one of which had never been played live before) and a couple of Coattail Riders tunes that Brian and Roger guested on. It's an absolute spectacle and testament to Taylor's credibility as a musician that rock legends such as these take such pleasure in performing with him.

It's a rousing finale to a fantastic evening and, as Taylor and his band close the night with a Cars cover, the amassed throng begin to realise they have witnessed something very special.

In a similar way to Dave Grohl's Them Crooked Vultures, this is by no means a vanity project, but another authentic, credible and talented band with a bright future. Red Light Fever is out now and the band returns to the UK next month. We'd highly recommend you take note.