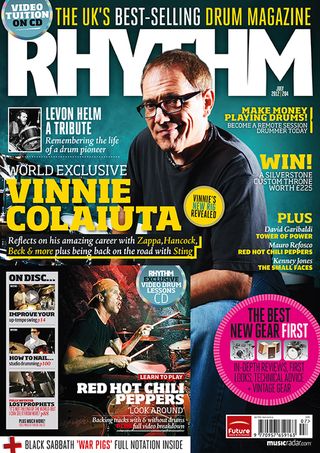 After far too long away from the cover of Rhythm, the man regarded by many as the world's greatest session drummer is back. We delve into Vinnie's astonishing career with Frank Zappa, Herbie Hancock, Jeff Beck and more, and he talks about being back behind the kit and on the road with Sting. Plus we get a world exclusive first look at his brand new set-up and the session superstar talks us through his switch to Ludwig and Paiste.

PLUS: Our tribute to the late, great Levon Helm

Inspired by Sabbath's slot at this summer's Download? Then learn their classic 'War Pigs'. We also have LostProphets hit 'It's Not The End of The World (But I Can See It From Here)' and latter-day Chili Peppers cut 'Look Around'. We also help you get to grips with studio drumming, metric shifts, three-note linear stickings, broken doubles and more.

Get your hands on a Silverstone drum throne.

You'll find all this and more in the brand new issue of Rhythm, on sale in all good newsagents, online and on Apple Newsstand