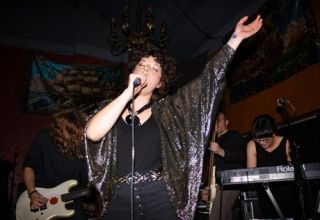 The 30-year-old suffered a massive brain haemorrhage during a Vancouver show last week, the band's publicist has revealed.

Devon was rushed to hospital, but doctors were unable to save him.

A statement from the drummer's family said: "Devon Clifford was an extremely gifted drummer and determined character.

"He loved his family, loved his band, loved travelling, loved being on stage and loved meeting people around the world.

"He was smart, witty, passionate, and music meant everything to him."

The statement also revealed the brain haemorrhage was brought on by congenital defects.

You Say Party! We Say Die! last year released XXXX - their third album and were due to begin a European tour in the coming weeks.