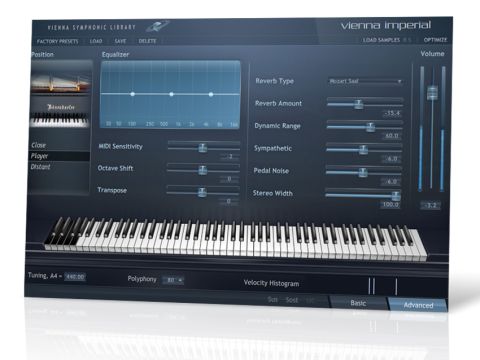 VSL's use of the CEUS system appears to have paid off, resulting in a premium quality sampled Bösendorfer piano.

The Bösendorfer Imperial virtual piano from VSL has been a popular choice for a couple of years, but the company's latest, Vienna Imperial, aims to improve on it as well as blitz the competition.

Based again on the Bösendorfer 290 piano (the 9'6" one with the extra low-end keys), VSL has sampled the computer-controllable CEUS-equipped model - more on this later. Using its new proprietary "piano engine", it's then squeezed the 500GB of 44.1kHz/24-bit sample data into a compact 50GB disk footprint. So what's the story?

VSL's new engine uses lossless data compression, which is decompressed on the fly. Unlike some other VSL instruments, it doesn't come in 'standard' and 'extended' editions; the package comes with all articulations available, including pedal noise, sympathetic resonances and multiple release samples, all taken from three recording positions.

This immense sample set offers up to 100 velocity layers per note, and when you factor in the various articulations, this equates to roughly 1200 recorded samples per key.

The interface has Basic and Advanced pages, with the former offering a selection of mic positions (close, player and audience). The Advanced page has much more, including 3-band EQ; a nice convolution reverb (sourced from the Wiener Konzerthaus in Vienna); stereo width adjustment; and faders to control sympathetic resonance, pedal noise and MIDI velocity response. You can save/load all of this information as presets from either page, too.

Vienna Imperial needs at least 1.5GB of free RAM, but you can save on memory by omitting the soft pedal and/or release stages. You can also reduce the sizeable CPU hit by lowering the Polyphony setting, and there's a handy Optimize feature that tags notes that you're using in your piece and unloads the ones you're not.

Sonically, Imperial is very impressive, exhibiting amazing consistency both from note to note and in terms of velocity. This makes playing pianissimo as seductive as full-on, pedal-down forte. However, such subtleties can easily reveal the limitations of your controller keyboard, and we found VI's MIDI velocity offset very useful in achieving the desired response.

The Bösendorfer itself has quite a rounded mid-range, and although you can tweak this with the onboard EQ, its sound may not appeal to those seeking the crisper tones of a Yamaha or the power of a Steinway - you'd best compare audio demos from different products to be sure.

Fundamental to the success of Vienna Imperial is Bösendorfer's CEUS system, as featured on its computer-controlled grand pianos. This is a very advanced 'player piano', and is capable of replaying pieces from MIDI. Not only that, but it can record and then play back a musician's performance.

It achieves this by means of optical sensors that record the hammer, key and pedal movement, with replay coming via solenoids. CEUS boasts a key strike accuracy of less than 2ms; hammer timings down to a thousandth of a millisecond; release and pedal movements measured in 250 steps per millisecond; and a dynamic resolution so great that Bösendorfer grandly describe it as "infinite".

Such a powerful system has many uses, but from VSL's perspective, it provides them with the ideal method to program, replay and record almost 70,000 samples with a level of consistency not normally possible.

One caveat is that, although the instrument comes in standalone and plug-in format (VST/AU/RTAS), RTAS support is currently Mac-only. Finally, you can only utilise one mic position at once, unlike, say, Quantum Leap Pianos from East West where you can blend them. Grumbles aside, Vienna Imperial is one of the most consistent sampled pianos we've ever tried and will delight those who can afford it.

Listen to our Vienna Imperial audio demo and you'll hear:

2. Full scale up and down arpeggio at six different velocities using the 'player' sample set.