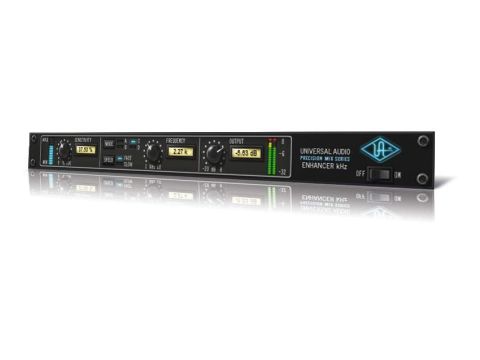 Those in the market for a professional enhancer with more fine-tuning options than most will appreciate this slick UAD-system-only plug-in.

Back in the day, enhancers, exciters and other 'magic boxes' were to be found nestling in the racks of many a studio, with staple modules being produced by companies like Aphex, BBE and Rocktron.

The main idea was to bring source material 'to life', usually by strapping such a device across the main mix, although using them on individual parts worked well, too.

While overuse of said processors was often tiresome to listen to, many producers still swear by the effects attained by dialling in just enough to sweeten the sound.

Universal Audio's modern take on such processing comes in the form of the Precision Enhancer kHz, which accompanies the release of the also UAD-powered but more old-school VCA VU (reviewed opposite).

What's immediately noticeable is that there's a good level of tweakability available from the plug-in's well-apportioned controls, compared to the minimal controls of classic enhancers.

Up first is Sensitivity, which, in practice, works like a mix control. It's adjustable up to 100%, with its own metering section showing the amount of enhancement being applied.

Following this is the Speed control, which lips the attack/release time between a snappier timbre more suited for percussion, and a rounded tone with slower response.

The Frequency knob (adjustable from 110kHz) acts as a cutoff filter, with all frequencies above the selected value being enhanced. Finally, we have the ubiquitous output level control, and its associated meter and bypass switch.

With the Precision Enhancer kHz aimed primarily at sprucing up dull or poorly recorded tracks, we were particularly keen to find out if the old adage about not being able to polish a turd would hold true under its influence.

We set it to work on some less-than-perfect mixes originally transferred from an old cassette. With the duller mixes (those lacking in top end), it was really easy to render them infinitely more listenable by applying either Mode A or B and playing with the Sensitivity.

For mixes that just sounded plain bad due to the aging of the master tape, Mode D and the All setting brought sense to the proceedings with their additional low-end enhancement and broader frequency range.

Moving on to more typical uses for an enhancer, such as breathing life into vocals and lead instruments, obtaining a good result was as easy as falling of a log, with our choice of mode based on the frequency content of the subject material.

The Precision Enhancer kHz has some excellent presets and seems well appointed to handle any enhancing task you'd care to throw at it, such as spicing up blunt-sounding material, adding extra 'air' to mixes, or injecting dynamism.

In particular, if restoring old tracks or general mastering is your bag, the Precision Enhancer kHz should sit pretty in your plug-in arsenal.