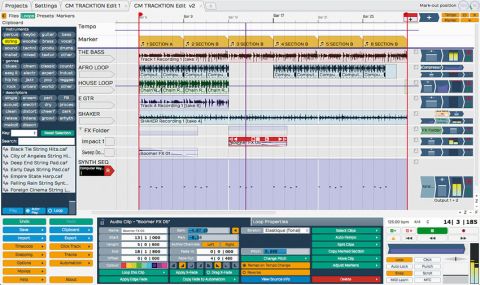 Tracktion requires a very specific approach and doesn't offer much in terms of bundled plugins, but it's powerful for the money.

First released in 2002 by developer Julian Storer under the company name Raw Material Software, Tracktion has certainly had an eventful history.

Taken over by Mackie in 2003, it became the standard software bundled with their interfaces and controllers, but in 2013, after five years of no development whatsoever, Storer got his baby back, releasing the contentious Tracktion 4. One year on and we're onto v5, which, unlike its predecessor, we can describe as a proper full version update.

In a nutshell, Tracktion 5 is a very competitively priced cross-platform audio/MIDI DAW that supports AU and VST plugins. In theory, it also supports Linux, although the software is still at version 4 in that environment.

It's a very lean application (the executable is around 20MB), and it comes with little in the way of proprietary audio content. However, it does import third-party loop libraries, interpreting embedded metadata - although it got some of the categorisation wrong, it did a reasonable job with our Apple Loops library.

One of Tracktion's defining features is its single-screen workspace, in which all recording and editing of audio and MIDI is done. Foldaway side panels handle browsing and mixing duties, and can be manually resized to suit your available screen space.

The Adaptive panel at the bottom reflects whatever you have selected above, and this is where you'll find many editable parameters such as audio clip gain, in/out fades and timestretch options, MIDI clip quantise settings and parameters for the onboard effects - third-party plugins open in their own floating windows, of course.

In terms of session management, a Tracktion project can incorporate multiple Edits, which are essentially arrangements. You can have more than one Edit loaded at a time (they appear as tabbed pages) and quickly switch between them. Thus, multiple versions of the same song can be kept open at once, which can be particularly useful when working on several ideas based on the same core project.

Unlike v4, Tracktion 5 adds a number of genuinely new features. The new Step Sequencer Clip looks like a typical MIDI region but expands to reveal a multilane/channel sequencer-style grid. You can specify notes and MIDI channels per lane, and set the overall grid resolution and length. Patterns can be looped and chained together. Also on the MIDI front, there's a new quick-learn screen for controller setup.

However, the most intriguing MIDI feature in Tracktion 5 is per-note CC automation. This isn't quite the same as the system in Bitwig Studio, where their proprietary instruments enable per-note control of parameters such as pan and "Timbre", but rather the ability to draw CC automation data that is attached to a specific note - useful when moving notes within a MIDI clip, for instance, and due to be enhanced in an upcoming update with per-note MIDI channel assignment as well.

We've mentioned Tracktion's multiple Edits already, and the new Edit Clip Nesting feature enables you to drag one Edit into another - for example, to create a slave Edit for vocal tracking, or to duplicate your main Edit across a number or variations. This renders an audio version of the entire source Edit, re-rendering it to reflect any changes whenever you modify and save the source Edit.

Tracktion's pervasive drag and drop approach (plugins are added by dragging them onto tracks; MIDI parts are created by dragging the MIDI Part icon onto tracks, etc) has now been extended to include its freeze function, letting you place the Freeze plugin wherever you like within a track's in-line mixer - very clever!

Meanwhile, the new CPU Manager window shows plugin usage and latency on a track-by- track basis. Here, you can also select and apply freeze to specific tracks or the whole Edit.

Tracktion 5's workspace takes a bit of getting used to but is actually very logically laid out, with very little in the way of extra windows beyond the main one. There's also an excellent context-sensitive help system onboard. But visually, it's a bit ropey compared to much of the competition, and the custom colour options have been removed in v5 (though we're told they'll be back), leaving it less attractive than version 4.

Once you get your head around its unique, quirky workflow, Tracktion 5 is wonderfully easy to use, while navigation, screen redraws and general onscreen activity are all very responsive. Both audio and MIDI clips follow a standard protocol whereby hollow adjustment handles change the clip size but don't move the contents, while solid handles move the contents. It's nothing we haven't seen in other DAWs, but it's made very simple and approachable here, and it works well, aided no end by very smooth mouse-/trackpad-controlled zooming.

Audio recording in loop mode produces multiple takes and allows 'swipe' comping (much like Logic), while for MIDI recording you can create a virtual MIDI input via which to use your QWERTY keyboard for programming.

Tracktion's included effects are basic, and aside from the EQ, which we quite like, they're its weakest aspect. There are also no onboard instruments beyond a basic sampler.

As it always has been, Tracktion 5 is a breath of fresh air in a world of homogenised DAWs. However, it does demand some rethinking on the part of the user, and its 'semimodular' nature suits creative work rather than more purely functional tasks such as mixing. Nevertheless, given the keen asking price, it absolutely deserves your attention.