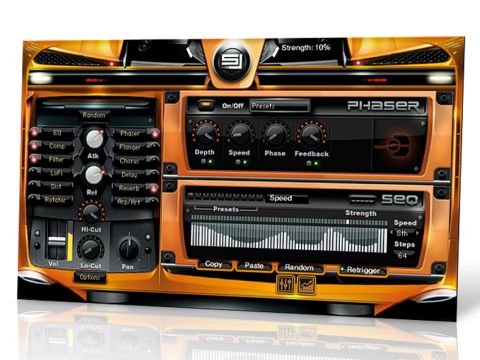 Anyone working on soundtrack-style compositions will find plenty to get their hands dirty with here, and in fact, just about anyone would find it inspirational. Impressive stuff.

Sounds are arranged across seven categories: Ambience, Bass, Drums, Impacts, Melody, Pads and Rhythms. Further instrument sub-categories are descriptive (Electronic, Fantasy, Metallic, World and so on), but with so many sounds on offer, finding what you want is still a voyage of discovery.

Overall, the sonic slant is 'soundtrack' rather than 'street', so although there are some perfectly serviceable urban drums, for example (Pop Hop Kit), there's far more world percussion (28 instruments).

Beat loops are also included in the Rhythm folder, boasting an array of eclectic styles (Action Packed, Hat Like, World, etc). And still on a percussive tip, the Impacts folder includes typical metallic and explosive sounds, plus subtler and often pitched one-shot FX.

Synergy X is of course a 'closed' library, which limits your ability to modify the base sounds themselves. However, there are 12effects slots (including Chorus, Filter, LoFi andArpeggiator/Articulator), and many slot parameters can be modified in real-time using the step-sequencer.

Most significantly, sequencer patterns can beprogrammed, copied and randomised individually for each parameter. Finally, for non‑looped patches, there's an additional step‑sequencer that switches the various effects slots in and out.

Synergy X delivers an impressive set of production-ready sounds that work beautifully straight out of the box but can also be completely transformed by the powerful effects and step-sequencer included in the software.