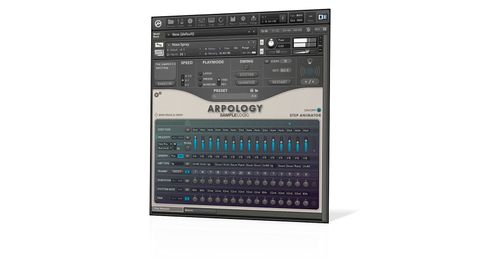 In practical use, though, it's a fun, intuitive, powerfully creative instrument that's perfect for conjuring up high-impact sounds and interesting grooves in next to no time.

Sample Logic's latest release, Arpology, puts its new Step Animator - a cross between an arpeggiator and step sequencer - front and centre, using it to power a 5.5GB sample library in Kontakt Player.

A Step Animator patch (150 presets ship with it) can be built on up to 128 steps, each step comprising knobs, sliders and secondary "Easy Draw" graphs for setting its Velocity (offset by user input or 'as programmed'), Length, Duration, Pan, Transpose, Arp Type (Up, Down, As Played, Random and two Chordal modes), Step Type, and Stutter Rate.

The first six of these are self-explanatory, but it's the last two that make the Step Animator the powerful machine that it is, capable of generating truly mental patterns of a kind that you won't hear anywhere else.

Each step can be assigned to one of five Step Types: Note (plays the note as normal), Glide (slides smoothly from the played note to the next one), Freeplay mode (makes a 'gap' in the arpeggio during which you can play whatever you like), Stutter (repeats the current note at the Stutter Rate, between 1/16 and 1/128) and Stutter Alternating (the same again, but arpeggiated).

There's also a big Stutter button that, when activated, makes all steps Stutters, overriding their actual assignments. Many of the Step Animator control lanes can be assigned to the mod wheel, and all of them can be randomised by activating their R buttons and hitting the big Random button. Arpeggios can also be dragged out into the host DAW or OS as MIDI.

The soundbank consists entirely of material that's already been used in other Sample Logic products, so be aware of that if you've already invested heavily in them.

That said, the 550+ instruments and multis are - almost without exception - amazing, from organic instrumental sounds to the purely electronic and everything in between, and all thoroughly arp-propriate, of course.

Sample Logic's proprietary Effects, Triggers and LFO sections are on hand to take them further, too, offering a solid array of processors (including the bolstering Wave 'synth' engine, etc) and a ton of modulation.