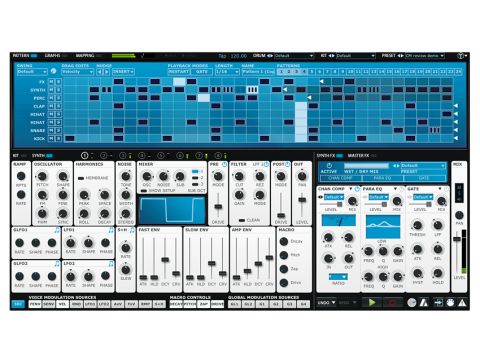 Having made its name with a series of drum ROMplers and sample-based drum sequencers, FXpansion made the move into modelling synthesis with Synth Squad.

This stunning trio of synthesisers is built on the company's Discrete Component Analogue Modelling (DCAM) technology, the idea of which is to model every component in a circuit, resulting in a realistic analogue emulation.

"Tremor's sequencer is in a class of its own for 'beyond the norm' pattern programming."

There are three panes to the Tremor GUI, each switching between two or three views: Synth/Kit, Pattern/Graphs/Mapping and Synth FX/Master FX.

The Kit view gives quick and easy access to levels, pan, mute and solo for Tremor's eight synth engines (one per 'drum'), as well asup to four macro controls per engine, the assignment of which is entirely up to you. Like every other TransMod modulation source in Tremor (see the TransMod modulation box), macros can be linked to multiple targets.

Switching to Synth view takes you to the controls for the currently selected synth engine, each of which generates its raw signal using a 'cloud oscillator' - a semi-additive bank of eight oscillators tuned to the specific set of harmonic intervals generated by a real drum head. The Peak, Space, Roll and Decay knobs enable the manipulation and reduction (down to just the fundamental) of these partials, and they can also be switched to Harmonic mode, which spaces them out evenly, like a regular synth oscillator.

If you're shuddering at the thought of dealing with anything even approaching additive synthesis, rest assured that these cloud oscillators aren't at all complicated or difficult to use. They only comprise eight partials, which you deal with as a group rather than individually; the controls are focused, succinct and intuitive; and the central Visualizer gives real-time graphical feedback on your tweaks (as, indeed, it does across the whole synth).

After that, we're very much in familiar analogue oscillator territory, with Pitch, Fine, Shape (morphing between saw, square and triangle), FM, Pulse Width and Hard Sync controls. The range of timbres that can be elicited from Tremor's oscillator alone is quite extraordinary, but it's further enhanced by the accompanying sub-oscillator and stereo noise generator.

The sub frequency is switchable between one, two and three octaves below the main oscillator, and it serves as the hard sync source; while noise is, of course, essential for hi-hats, snares and claps.

Then it's on to the filter, which offers a huge range of modes, including 2/4-pole high-, band-, low-pass, notch and peak, and various crazy SVF-emulating combinations thereof. It's certainly comprehensive in terms of shaping, and - helped in no small part by its pre- and post-overdrive units - sounds awesome.

Finally, throw in three insert effect slots hosting a sizeable array of processors (delay, distortion, dynamics, EQ, reverb, etc) per engine, and three master effects slots, and you have a veritable sound design powerhouse - and one that's more than capable of bass and melodic sounds, as well as drums and percussion.

Tremor's eight-lane pattern sequencer can be recorded into via a MIDI keyboard or pads, or programmed with the mouse. Twenty-four patterns can be built up (although there's no song mode, strangely) and switched between via MIDI or mouse.

In use, it's all very straightforward, with variable pattern lengths, swing control, preset pattern insert, left/right nudge, and a three-mode version of Geist's Drag Edit function (including Repeats mode, where synced stutters and rolls are drawn into single-note divisions).

The jewel in the sequencer's crown is the ability to make complex polyrhythms by simply dragging the Track Length arrows along the eight lanes, thereby setting independent loop lengths for each part. So, you could have your kick drum playing a regular four-to-the-floor, while your hi-hat loops through a pattern lasting, say, seven 16th-notes, and your cowbell cycles through 11 16th-notes, resulting in a constantly shifting rhythm. This simple, beautifully executed concept puts Tremor's sequencer in a class of its own for 'beyond the norm' pattern programming.

Synth Squad users will be overjoyed to see that FXpansion's TransMod modulation system has made it into Tremor. This enables mapping of the instrument's modulation sources to multiple destinations, with each routing getting its own depth setting.

Along the bottom of the Synth view is a row of buttons for all of Tremor's modulation sources - LFOs, envelopes, macro controls, graphs, sample+hold, etc. Clicking one reveals all of that source's current assignments in the Synth interface; to route the source to any unassigned parameter, drag up or down on its dial collar or fader slide until the blue indicator line (and, indeed, the sound of the modulation!) reaches the desired depth relative to the current controller position.

It's as simple as that, and there's no limit to the number of assignments that can be made. Most synth and effects parameters are valid targets, and although TransMod depths can't be modulated within Tremor itself, external MIDI controllers and host automation can be assigned to them.

TransMod is every bit as effective in Tremor as it is in Synth Squad, and our only criticisms of it are that you can only view/edit the assignments for one mod source at a time, and you can't mute mod sources.

But while TransMod is a big selling point, the two things that really set Tremor apart for us are the sound and the brilliant polyrhythmic sequencer. While it always comes across as authentically 'analogue', there's also a crisp, modern edge to the noises it makes that we've honestly never heard before in a non-sample-based drum machine. The bottom end it delivers is nothing short of phenomenal - huge, rounded, beefy bass tones, baby.

As is almost inevitable with any 1.0 release, there are a few things that we hope are on the list for future updates: namely, a song mode; the ability to control those Track Length arrows via MIDI and TransMod; and more refined copy and paste functions in the sequencer.

Even without those, however, Tremor is fun, fat and wildly creative, with that luscious, rich, 'analogue' DCAM flavour fully evident all the way along the signal path. Check this out and prepare to be amazed…