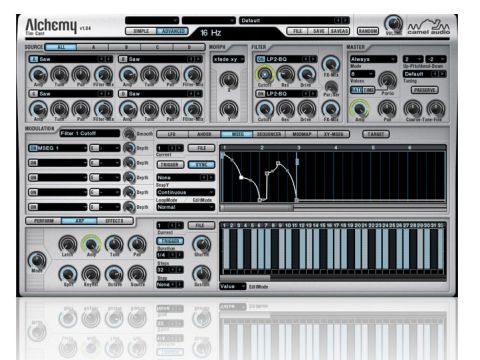 Alchemy is an astonishing instrument that will delight hardcore synth and sampler lovers no end.

At first glance, you might mistake Alchemy for a common or garden ROMpler, as it comes with a ton of sample-based patches that can be tweaked with the built-in synthesis engine and effects - sounds that would take an age to create from scratch.

Unlike most ROMplers, though, this instrument also enables you to load your own samples.

Alchemy's architecture centres around its four sound generating modules, which are known as Sources. These are a little more complex than your average oscillator and have three types of synthesis under the hood - Additive, Spectral and Granular.

Aside from tinkering with the presets, the simplest way to get sound out of the instrument is to use the Additive element in virtual analogue mode. This gives you a variety of simple wave shapes, a symmetry control for width-modulation effects, and a voice count knob, which goes all the way up to a staggering 600.

Alchemy has a built-in library of instruments, effects and loops in audio format, and you can import your own WAV or AIFF files. However, it's not possible to create your own keyzones within a Source module.

Alchemy will load SFZ files (SoundFonts), though, so the truly dedicated could create their own multisampled patches with the help of an external editor.

When importing a sample, you're presented with a choice of modes that correspond to Alchemy's elements: Additive, Spectral, Additive and Spectral, or Granular. These determine how the audio is analysed and which of the modules are most appropriate.

For example, Additive mode works well with single-note samples, where the frequencies present in the audio are analysed over time and resynthesised. Not only does this process sound great, but the volume, pitch, pan and phase of the individual harmonics (aka partials) can be edited in a separate panel.

This area includes an envelope that can be used to view the volume, pitch variation, pan and phase characteristics of individual partials over time, along with a typical additive synthesis harmonics editor for altering these values.

The Spectral element works well on complex samples, using a combination of noise and sine waves to resynthesise the audio. It's possible to set this element to use just sine resynthesis (or only noise) to create unusual effects, and audio can be edited with a spectral display showing frequency over time.

Editing is done graphically, using a variety of brushes, just like a paint program. While this isn't the most precise way of doing things - you can't realistically draw in chords or melodies - it's possible to enhance transients with a specialised brush, and you can copy and paste by selecting an area of the spectral display as a brush.

If Granular analysis is selected, the audio is sliced into thousands of tiny chunks, enabling tempo and pitch to be adjusted independently of one another. Many soft samplers feature granular processing capabilities, but Alchemy is particularly adept, offering eight different window types (which affect each grain's amplitude envelope), a Density control (with low values creating unnatural stuttering effects) and a grain Size parameter.

Each Source has Stretch and Position knobs that can be modulated to create outlandish effects, such as slowing the audio down until it becomes a single, repeating waveform. Straightforward, non-granular sample playback is also available.

As well as these sound-generating elements, there's also a section for applying up to three filters in series or parallel to each Source. In addition, there are 15 different filter modes, including the usual low-/high-/band-pass options, and less common ones like ring modulation and tube emulation.

The outputs of the four Sources can be combined in various ways using the Morph panel. This has nine different modes, the simplest of which, Xfade, mixes the output of the Sources together, with the X and Y axes controlling the balance between all four.

More intriguing still are the morphing modes - for example, select Morph and a single Source is heard at once, with the X and Y controls being used to change between the parameters of each generating module. So, if one Source is tuned down an octave, morphing between that and one that isn't will result in a smooth pitchbend rather than a crossfade between the two signals.

Other, far more specialised modes blend between more specific controls, such as the parameters of certain elements or envelope times. The X and Y values themselves can also be modulated, bringing to mind the vector synthesis instruments of the past.

Once all four Sources have been filtered and mixed/morphed, the signal is pumped through another pair of filters, which are even more comprehensive, with 50 different types on offer. For each of these, there's a knob that sets the balance between serial and parallel routing - a very nice touch.

You'll also find a comprehensive modulation panel; almost all of Alchemy's parameters can be modulated via the LFO, AHDSR envelope, multiple segment envelope generator (MSEG), sequencer, note property or performance parameter. A single LFO, AHDSR, MSEG or sequencer is available at first, but you can add more at will - up to 16, should you require them.

In addition to Alchemy's Sources, filters and modulation panels, the synth also has Performance, Arpeggiator and Effects sections, which are accessed at the bottom of the interface.

The Performance screen offers eight knobs and two virtual XY pads. All of these work as additional modulation sources that can be applied to multiple parameters at once, just like the rest of the synth's mods.

You can store eight 'snapshots' of the Performance settings in the Remix pad and morph smoothly between them by dragging a cursor around the pad - it's very similar to the Sound Variations system used in Native Instruments' Kore.

The Arpeggiator panel sports its own step sequencer, with up to 128 steps, each of which has separate settings for value, length and swing. The output can then be applied to the arpeggiator's amplitude, pitch and panning knobs, and extra sequencers can be created as necessary.

Finally, the five-slot Effects section houses filter, EQ, distortion, delay, reverb, modulation, pan, gain and dynamic effects. Rather excitingly, their settings can be modulated too, making this section incredibly useful and well-integrated when it comes to sound design.

Alchemy's supplied preset library is good, although the quality is inconsistent. But to use it as a mere ROMpler would be ignoring the software's fantastically deep sound design capabilities.

You'll find a robust array of sampling and synthesis techniques that make Alchemy a compelling prospect for those eager to expand their creative arsenal, and it's the perfect partner for a more traditional sampler or synth.

Listen to Alchemy in action: