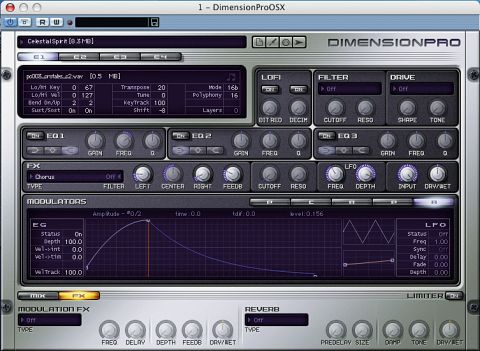 A stunner. Even the high price tag and occasional glitch can't dampen our enthusiasm.

We never thought we'd find ourselves using the words 'Audio Units' when describing a Cakewalk product - until now the American company have rarely strayed out of the relative safety of the Windows domain. Sure, they distributed a Mac product or two back in the day, but this latest release - the Dimension Pro synth - represents their first serious attempt to attract Apple-based musicians.

This new instrument is Cakewalk's latest collaboration with rgc:audio's Rene Ceballos, and is an expanded version of the Dimension synthesizer that comes with Project5 2.

It seems that many software instruments these days fall into one of two categories: there are the subtractive synthesizers and there are the ROMplers.

Sure, a ROMpler might have a filter and a simple envelope or two so the user can tweak the included samples, and a subtractive synth might fortify its collection of vintage waveforms with a smattering of sampled waves, but most products are weighted towards one side of the spectrum or the other.

Dimension Pro, on the other hand, is bursting with both sampled content and all of the bells and whistles one might expect to see on a complex subtractive synth.

Cakewalk are shipping Dimension Pro with a whopping 7GB of samples (these are spread across a pair of DVDs). The samples are stored as SFZ files, a format we first saw used in rgc: audio's SFZ SoundFont player.

They cover all of the sonic categories one might expect to see in a general purpose ROMpler - there are drum kits galore, ethnic and orchestral instruments and loads of synthesizer waveforms.

Guitars and basses abound, and there's a good selection of keyboard instruments. You also get a nice bonus in the shape of Gary Garritan's Pocket Orchestra.

While the included samples certainly pass muster on their own, Dimension Pro only really comes to life when said samples are pumped through its vast synthesis architecture. It offers the ability to stack four stereo sample sets, each of which has a complete array of advanced synthesis functions.

You can spit the samples through a multimode filter, a bit-reduction processor and a fully parametric 3-band EQ. After these comes a dedicated multi-effects processor with another resonant filter and an LFO. In addition to the insert effects, you can send each layer (or Element) to an aux effect.

Also onboard are a staggering 20 LFOs and 20 multi-stage envelope generators. This means you have a phenomenal range of modulation possibilities. You can route these mod sources to all the usual destinations (including pitch, pan and amplitude), as well as to filter cut-off and resonance.

Everything that should sync to the host tempo does so, ensuring that your rhythmic machinations automatically lock to your song's bpm. All very nice indeed.

Other goodies include a Vector Mixer for performing X/Y sweeps between the four Elements and a pop-up mod matrix for routing your internal and MIDI modulation sources to the desired parameters.

If all this sounds a little on the complex side, you'll be pleased to learn that there's a bound paper manual provided in the box. However, such close attention has been paid to the interface that you'll only need to refer to it if you're an absolute beginner.

The GUI looks very much like that of Z3TA+ - there's really just a single main screen, which shows most of the parameters for the currently selected layer. The bottom half of the instrument includes a Modulators display that displays the selected envelope and Low Frequency Oscillator parameters.

Of course, what you really want to know is how Dimension Pro sounds. Well, a stroll through the 1500 presets reveals a wealth of usable and versatile programs - there are some very evocative pads and effects in there, and a host of stunning layered sounds.

You'll also find a good selection of percussive sounds (some of which come with MIDI loops that can be dragged into your host sequencer) and we're already planning on overusing a few of the included electric bass sounds.

Try as we might, we couldn't hear a bad loop or any other undesirable artefacts. There might be a bit too much reverb on some patches, but this problem is easily rectified with a simple twist of the relevant knob.

We did experience a loud 'pop' when switching between some presets while a note was being sustained, but on the whole, our complaints are minor.

Of course, presets are a subjective area. What one user loves, another will loathe. We weren't nuts about the leads, but others might find them to be just the thing.

What's more, with this many presets to choose from, you're bound to find something that fits the bill. Sound designers will have great fun subjecting the samples to all that synthesis power.

Dimension Pro deserves to be successful. At £169, it's not a bargain, but neither is it as expensive as some ROMplers. The developers have told us that they will support the software with more content in the future, so it may soon be able to compete with other sampling apps in terms of expandability.

At the moment, Dimension is no Kontakt 2, but it does give you a versatile sound palette at a good price, and that'll do for now.