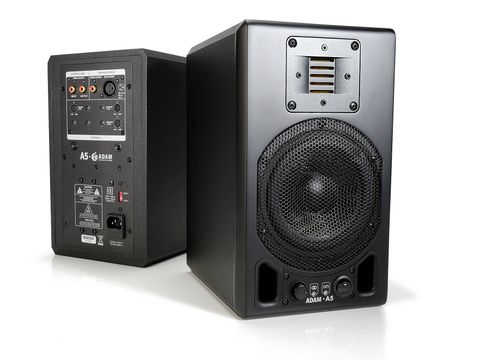 The A5 is an impressive compact monitor that offers stiff competition for other smaller models.

The A5 is Adam's smallest studio monitor yet. Similar in concept to its A7, but reduced in scale, it features the same type of woofer but in 5.5-inch form, and of course its acclaimed ART (Accelerating Ribbon Technology) tweeter.

Power comes from two 25W onboard amps, with the main level and power switch conveniently located on the front panel. On the back panel you'll find three additional controls. The first is a straightforward tweeter level (+/- 4dB), but there are also two tone controls offering shelving EQ at 6kHz up and 150Hz down (+/- 6dB on each).

Inputs are on both balanced XLRs and unbalanced phonos, but there are also a couple of further phonos labelled as 'stereo link'. These enable you to hook the two monitors together, controlling the volumes of both from one level control. A nice touch if you're running them directly from your soundcard.

Finally, the A5 also comes in three finishes - matt black, gloss black and gloss white at an extra cost.

At just under 11 inches tall, these are pretty compact monitors, but at five kilos, when you pick them up, you know they're jam-packed with goods. Although technically similar to the A7, the A5 is visually different, most obviously with its split-front bass port. Also worth noting is the integrated front grill.

Round the back things are very tidy, with the amplification and heat sinks all tucked. At less than eight inches deep, the A5's footprint should be fine for most desktop users.

In use, the stereo link feature requires you to plumb both left and right channels into one speaker (either will do as they're both the same), and then use the link output to feed one channel to the second monitor. With all cables plugged up, the linking LED lights up on the front panel of the first monitor, letting you know it's both active and the master.

The only slight problem with the whole thing is you can only do this using unbalanced connectors. If you want full balanced hook-up you'll have to stick to the XLR inputs and forget about using the stereo link.

Adam monitors have an enviable reputation for clear upfront sound. The A5 follows in this tradition, and our first impression was that they could become tiring over long periods. Alas, this is often the case for good monitors and not a criticism.

Having spent some time fiddling with the various EQ options and levels, for monitoring at least we came to the conclusion that they sounded best in their ﬂat state. Even so, with some boost from both the built-in bottom and top EQs, it's easy to replicate a more ﬂattering and 'bigger' hi-fi style sound.

Given the small amps you might expect these speakers to lack volume - they don't. But like all monitors of this size, apart from the obvious tail off in the low end, they do lack a sense of overall scale.

Even so, for our money, these are some of the best small monitors we've ever heard, and present major competition for similar models from the likes of Genelec. A great choice for the small studio.