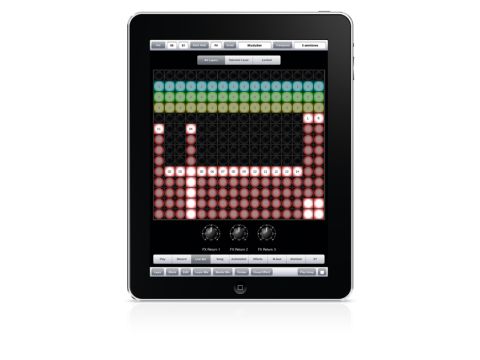 A decent (if slightly expensive) option for anyone who wants to produce music on an iPad.

The preview video for Aurora Sound Studio HD had certain team members compulsively checking the App Store for its release, for it promised a full production studio for the iPad. Not a DAW, mind you - no audio recording would be provided, for one thing - but an electronic studio with everything you need to compose and perform electronic music: drums, subtractive and waveshaping synthesisers, a sampler, mixer and effects, all tied to a multitouch grid interface resembling the iconic Yamaha Tenori-On.

Aurora HD delivers on its promise in spades, albeit with a couple of caveats. The interface is divided into tabbed pages, some of which are geared towards arranging your sequences, while others are aimed at live performance with instruments and effects. Sequences are arranged in 14 layers, each with a fully editable instrument assigned.

Each layer has three send knobs, for routing the signal to a trio of aux send channels, with a choice of nine effects for each. Additionally, you can apply the Atomizer and M-Gun functions in real time, the former being a sort of sample-and-hold function (think Ableton Live's Beat Repeat), while the latter is a per-sound 'drum roll' function.

Songs can be exported as WAV and AAC files, or even as MIDI. The latter ensures that compositions sketched out on Aurora can be reworked using your DAW's instruments and effects.

So what are those caveats we mentioned earlier? Well, the big one is that there's no way to write any sort of velocity data to the individual layers. You can, however, fake it using the synthesiser's built-in MSEQ function, but this is only available to the analogue synth.

Also, a mere three effects slots seems miserly, and there's no compressor. In addition, while you can upload and share songs via an online Song Library, this can't be done with songs that include your own samples.

Nevertheless, 4Pockets has brought in a winner, albeit one that carries a price tag considerably higher than those to which App Store customers are currently accustomed. The problems are few and do nothing to get in the way of what is a truly inspiring production environment. If you're an iPad owner in the market for a portable production tool, you definitely won't want to pass this one up.