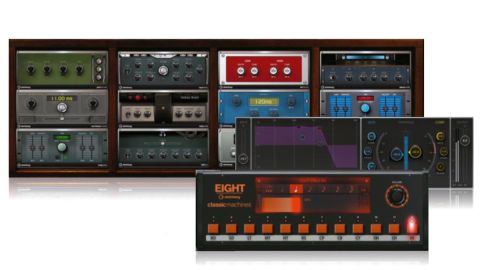 We recently looked at Steinberg’s Cubasis 3.0 update and, one or two niggles aside with pinching and editing, concluded that it is still one of the best iOS DAWs around.

It’s also one that now runs with some ease on an iPhone, delivering one of the most pro DAW experiences out there, on a device that fits in your pocket.

However, while reviewing the update we became very aware of a multitude of optional extras that Steinberg are punting in various parts of the software, so it’s time to look at all of the various Cubasis options now available.

There are several updates and options available, and not all of them produced by Steinberg. A Waves Plugin Bundle ($7.99 each or $19.99 for all three), that originally arrived with Cubasis 2.3, comprises the Waves L1 Ultramaximizer, AudioTrack and the Q10 Equalizer.

L1 Ultramaximizer is a slick plugin for mastering and features simple controls and options for Input, and can be very transparent in use. Q10 is a lovely multiband EQ that delivers a lot more precision than the Cubasis’ own EQ, featuring, as it does, up to 10 bands of equalisation so you can get in there and really tweak on a surgical level.

AudioTrack, meanwhile, is a full-on channel strip that offers a neat 21st century take on Cubasis’ own Channel Strip. Where that features traditional ‘knobs’ for Gate, Compressor, Filter and Saturator.

AudioTrack has a handy graphic 4-band EQ and simple gate and compressor with more up-to-date controls that each incorporate levels.

You could probably get away with Cubasis’ included outboard rather than purchase this one, but overall, the Waves Bundle still represents great value, especially for that prestigious Waves name, with the EQ and L1 delivering particularly pro results for an iOS device.

FX Pack 1 ($6.99) is Steinberg’s bundle of six delays and reverbs, and features everything from the vintage-style Tape Delay to a couple of simple reverbs. The latter are surprisingly effective given their basic operation, while Tape Delay is the most fully-featured delay unit, with very useful Head controls and a Vintage dial for controlling flutter and colour. Again, this is a useful bundle, especially for the price.

FX Pack 2 ($6.99) is full of more creative, vintage effects including more obvious rotary and wah efects and less obvious, but no-less useful, TalkBox and Bit Reduction boxes, all of which are great for more dramatic effect layering. Many of these really can take your sound into some more unexpected arenas than FX Pack 1, if that’s what you wish.

• Fabfilter Plugins
Expensive, yes, but just about the best iOS effects out there.

• Georgi Vatanator
Not tested, but this iOS drum machine has 140 presets and emulates a lot of vintage hardware.

Well, we admit that we hoped the Micrologue Arp ($4.99) add-on might be Steinberg’s take on an ARP synth, but the ‘Arp’ here stands for ‘arpeggiator’, and very decent this one is too. Essentially it’s a mini 16-part arpeggiator which you can apply to any preset sound to create instant electronic melodies and patterns for that Stranger Things vibe.

While the device itself is very hands-on and easy to get to grips with – you can adjust pitches of the 16 parts with your fingers, choose from nine patters, select triggers, keys, tempos and scales, along with useful dials for Swing and Gate Scale – it might be the Arp Factory Presets folder that you visit first.

This is jam-packed with arpeggiations that cover different sounds, different timings and feels and really does give a great taster of what this new device adds to Cubasis. The bottom line is that it turns Cubasis into an electronic marvel, so is well worth the small outlay, especially if EDM is your thing.

That just leaves Classic Machines ($6.99), which is 10 drum machines, based on classic beat boxes, each essentially a ROMpler playing back classic beats, with additional MIDI files and beat repeat note options. As with Arp, these really do add a great electronic edge to Cubasis, rounding it up nicely into a do-it-all DAW.

These are all worthy upgrades to Cubasis, especially if you want to take the DAW into more electronic directions, although the Waves Bundle is also an especially good pro buy. Get the lot, and you’ll expand the iOS DAW’s capabilities immensely, for an outlay of just over 40 bucks.