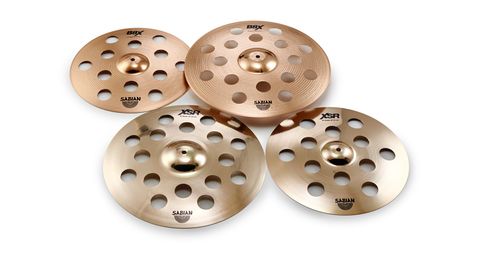 Sabian’s O-Zone effects cymbals have been a big success. Offering 16" and 18" versions in the budget B8X and middle market XSR lines is surely welcome news for drummers everywhere.

Cymbals with big holes drilled in them. Who’d have imagined it would grow into significant business?

It seems we can’t get enough of them. Sabian did it first after the Canadian company’s product development guru Mark Love introduced the idea to Dave Weckl and the HHX Evolution O-Zones were born in 2002. Since then most other companies have emulated the concept, and Sabian has itself offered variations including AAX, Holy chinas, Aero splashes and Air splashes, etc.

Visually, these new O-Zones differ from the upmarket AAX and HHX Evolution O-Zones, which have single rings of holes. The B8X and XSR models have double rows of slightly smaller (45mm diameter) holes. There are two rings of six in the 16" cymbals and two of eight in the 18" pair.

B8X is the latest line in Sabian’s pursuit of a decent cymbal made from low tin content B8 bronze, while XSR is the new update in the budget B20 bronze corner. They have similar profiles, but the B8Xs have the brash orangey colour of B8 bronze, while the XSRs have the more subdued hue of B20. The latter also have fine lathing top and bottom, whereas the B8Xs are broad lathed.

Although at the budget end of the Sabian spectrum, B8X cymbals nevertheless still undergo quite complex production and quality control processes. They are hand lathed, and machine hammered with hand guidance, then they are hand tested and weighed before ageing in the vault and finally being tested again on release.

XSRs are professional-level cymbals at a mid-level price. The technology behind their production has been adapted from the Evolution and X-Plosion series. They are pinpoint lathed and hammered, while their profiles have been enhanced and bells re-shaped to accelerate the overall sound.

These two O-Zones are created by taking relatively thin and fast XSR crashes and drilling the double ring of holes in them.

Now here’s the thing: when the sound you’re after is raw and nasty, it doesn’t follow that you need the more expensive cymbals. You’re wanting impact more than subtlety. So the fact that the B8X O-Zones are undeniably less refined and smooth than the XSR O-Zones does not make them ‘worse’.

Nastier, quite probably, but that might be more desirable. That is for you to decide. The original B8s, many years ago were, frankly, not great. The B8 Pros were a respectable step up and now the B8X adds another layer of sonic sophistication to Sabian’s ongoing toils in the B8 dungeon.

The former B8 Pro O-Zones were already a popular choice, so here we have a slightly more tasty version of those. Starting with the 16" B8X, the first impression is of a harsh and aggressive trash-crash, undeniably bright, high-pitched, loud and cutting. It also has a fast decay, so is controlled and good for smash-riding in a punk manner, perfect for the neighbours!

Moving on to the 18" B8X, this is even more ear-splitting. Broader and louder than the 16", it packs a pretty violent, raw and assertive punch. Whereas chinas have a full-bodied splang, O-Zones have considerable mass removed by the plentiful holes, so they tend more to the fast crash area with razor sharp, sizzling splashiness.

The XSR pair are darker and smoother, but if anything edgier - feeling a little thinner and faster; you could say more slippery. The tone is rather more silver-tongued, with a bigger dollop of China-style trashiness. But they take up less of the sonic spectrum than an 18" China.

There is more of an electronic white noise type of body with a little more sustain. With their musical B20 bronze depth and class, the XRS O-Zones can be seen as effects cymbals but can also double as regular crashes, adding spice and a fast, slicing quality to your regular crashes, which can sound a touch safe and samey once you add an O-Zone.

As suggested above, the fact the XSR series is finer and more expensive cuts no ice when it comes to O-Zones. If you want dynamic and nasty the B8Xs are fun, if you want a little more depth and hiss, the XSRs are worth considering. Whether used as colourful interjections or as climactic blast-thrash onslaughts, these cymbals are all about adding zest and zip to your beats.