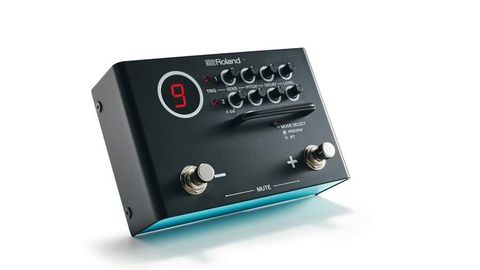 The TM-1 represents a user-friendly entry into the hybrid world at a remarkably affordable price. The clever device has plenty of tricks up its sleeve for more advanced users too.

The new e-module is part of a slick new series that also includes the SPD::ONE, TM-6 PRO and RT-MicS. Due to hit the shops in the spring, we’ve managed to get our hands on one ahead of release.

The small and lightweight unit (150x95x60mm, 550g) features a blue plastic body with a protective black metal cover. Its sleek colour combination is in keeping with Roland’s other hybrid products and resembles the aesthetics of BOSS guitar pedals (another Roland Corporation brand). What makes the TM-1 special is the fact that it’s the first e-module designed as a foot pedal.

The main controls are two guitar pedal-style stomp switches, which enable toggling between the 15 inbuilt kits. These switches can also be programmed to perform a multitude of other functions. A single digital LCD screen displays the selected kit (1-9 through A-F) and small physical dials allow control over the two trigger inputs. These offer sensitivity, pitch, decay and volume control for each trigger. Both inputs are mono, although a dual trigger can be used by employing a splitter cable to enable separate head and rim control.

Sounds are controlled via the accompanying TM-1 Editor software, which is available not only for Mac and Windows but also Apple and Android mobile devices. Connected via the USB input on the rear of the unit, these devices can be used to assign user samples, re-order kits and customise trigger settings.

With two sounds per kit and a total of 15 kits, the TM-1 only has the capacity for 30 samples at any one time, but the plug and play nature of the app allows for quick customisations. In addition to being able to add custom samples, the software comes bundled with a further 150 sounds to get you started. Sounds can be set to one-shot, loop or gate modes and triggers can be linked for blending sounds or mute grouped so that one sound is cancelled out when the other is triggered.

The TM-1 allows a maximum sample length of six seconds, which makes it best suited to one-shots and short loops. The module can be powered by USB (although only by computer), battery powered using the included 9v or with a separately available power adapter.

Once out of the box, the TM-1 is up and running in the few minutes it takes to attach the triggers to our acoustic kit and connect them to the module. We’re using Roland RT-30 triggers, although any brand is compatible. The 15 on-board kits are pre-programmed for the most part with kick and snare samples, starting with a selection of metal and rock options, then ranging through funk, hip-hop and house styles. These kits serve as a useful starting point for beefing up our existing acoustic sound, the decay function coming in particularly handy for tweaking the sounds available from each kit.

The TM-1 truly comes in to its own when we get to work with the accompanying editing software. We tested it using Mac and iPhone, although a lightning to USB adapter was required for the latter. The TM-1 Editor splits down into three menus: Edit, Move and Setup. Assigning sounds within the Edit screen is a simple drag and drop procedure on desktop or achieved by opening folders on a phone or tablet. The ability to use MP3, AIFF and AAC formats in addition to the standard WAV eliminates the need for file conversion and boosts the convenience of adding custom samples - this should be music to the ears of less tech-savvy drummers.

Kits can be rapidly rearranged in the Move menu by simply dragging them into a preferred order. An unlimited number of user setups can also be saved and recalled, which makes switching between set lists or even separate bands a simple process. Both of these features serve as a real time saver in a performance setting, although it’s worth noting that loading a saved configuration can take between 10 and 15 minutes.

The TM-1 is still fully functional whilst connected through the app, which means that devices can be left connected whilst performing. This comes in useful if you’re prone to forgetting what’s been programmed or like to tweak as you go, perhaps in a rehearsal setting. As a foot controller the module is exceptional and feels rock-solid positioned on the floor next to our hi-hat pedal. The degree of functionality from the stomp buttons is impressive - they’re programmable to cycle through kits, jump to any given kit, mute selected triggers (toggle or momentary) and can also act as triggers themselves for assigned sounds. Being able to react differently according to the demands of the drummer makes the TM-1 a practical add-on in almost any musical situation.