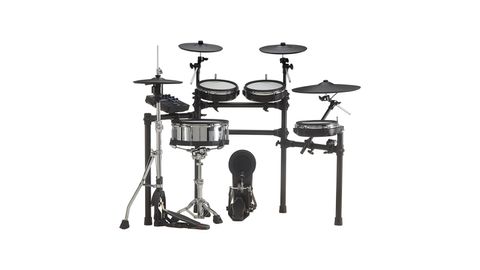 Electronic kits are resembling our acoustic darlings more than ever, and the Roland TD-27KV hits right at the sweet spot of subconscious feel, gelling the playing surface with the sound it creates, and perhaps most importantly to many, a price tag that – while by no-means cheap – isn’t wholly unrealistic.

The start of 2020 was a busy one for Roland: releasing not one, but four new electronic drum sets at this year’s NAMM Show. At the top end, there were three configurations of its new VAD (V-Drums Acoustic Design) kits, comprising full-size and shallow-depth wooden shells, and all based around the new TD-27 module. Then in the ‘mid-range’ (by Roland standards) comes the TD-27KV kit – a more traditional-looking electronic drum kit – which is the subject of our review.

We’re going to start by talking about what isn’t new – the stuff that we’ve seen before on other Roland kits in this price range. That’ll be the (albeit great) VH-10 hi-hat pad, KD-10 kick drum pad, and the CY-12C and CY-13R cymbal pads. Everything else is new at this price-point, and the changes are far removed from simple cosmetic tweaks. Hold on to your hats, because the list of new features will make your mesh head spin.

A key feature of the TD-27KV is the pads themselves. The PD-140DS snare pad (actually, the 14” x 4.3” shell makes it more drum than pad), and CY-18DR ride cymbal pad were previously only available with Roland’s TD-50 kits, making this the first time they’ve trickled-down to be included with a more affordable kit. Roland has made drum-like snare pads before, but the difference here is that both pads are equipped with Roland’s digital sensor technology. What that translates to is multiple positional sensors in addition to the standard zone trigger, which in turn aims to eliminate ‘hot spots’ and mis-triggers, while offering a greater resolution of triggering across the playing surface.

For the snare drum pad, this means three position sensors each on the head and rim zones, and three across the bow of the ride cymbal. These digital pads also feature their own processor to make sense of the zone and placement of your strike without any latency, so there really is a lot more going on than a simple piezo trigger signal. As such they connect to the module via what is essentially a USB cable.

Next up is the module that the kit takes its name from. Design-wise, it follows the same sleek, glossy aesthetic we’ve seen from Roland in recent years on the TD-17 and TD-25: gone are the squat faders and multi-coloured buttons of yore, replaced by minimalist jog wheels and multi-function rotary encoders to keep things as clutter-free as possible. But it’s not just about the looks, Roland has unleashed a number of features on the TD-27 that bring it into the new decade.

First is its branded technology, such as Prismatic Sound Modelling, and PureAcoustic Ambience Technology. PSM (sort of like a next-generation COSM modelling) works with the module’s raw samples to deliver a richer, more realistic reproduction of the sounds you’re triggering. Think of the samples as your raw ingredients, and the modelling behaviour as the seasoning to turn rigid wav files into something way more interesting.

The PureAcoustic Ambience Technology relates to the treatment of the virtual mic placement for overhead microphones and room sounds. If you’ve used any drum sample packs in the last few years, you’ll know how much these mic positions can influence the overall sound of your kit, and here, Roland has supplied plenty of options for room types and microphone positioning, allowing you to sculpt distance and width from your ambient mics to create even greater realism.

The fun doesn’t stop there, though, because there’s also the ability to import your own samples via an SD card, on-board Bluetooth, and while we’re at it, a 28-channel USB audio interface.

It’s not short on connectivity, either. To the left side of the module is the SD card slot, plus the USB socket for the audio/MIDI interface. Turn the module around and the business end includes a DB-25 connector – this handles the bulk of the trigger inputs from the included cable loom – but there’s a lot more. You can connect up to three digital pads, plus there are four additional trigger inputs on TRS jack sockets, and a footswitch input, leaving you safe for future pad and controller upgrades.

You also get two main outputs, plus a pair of mono direct outs for sending your signal to an alternative destination, plus a headphone output and aux-in. Finally, there’s traditional 5-pin MIDI in/outs for those wanting to hook the module up to MIDI-equipped hardware.

That’s a lot of spec, and it shows just how much Roland is able to leverage the power of R&D in order to pass technology from its flagship products down the line in order to remain at the top of the e-kit game. But while it leaves us not really wanting for anything on paper, it counts for nothing if it doesn’t bring the goods in performance.

The standout first impression for us are the digital pads, in particular the snare drum. With some clever technology going on, the size and feel could be overlooked, but with the pad sat on our snare stand, and a quick turn of a drum key, it’s easy to forget that we’re playing an electronic drum. So much so that it overcame our usual haste of scrolling through kits, instead keeping our focus locked on the different snares available, trying to trick it into falling over with some rudimental practice. The pad won, and after addictively playing with different snare types, virtual head choices, muffling and tuning for way too long we remembered the rest of the kit. Another seemingly small point is the automatic cross-stick switching. No enabling the X-Stick setting here, you just play like you would on a real snare and it reacts as you’d expect.

Likewise, the ride cymbal will be something of a revelation to anyone who is used to playing smaller pads on affordable e-kits. As much for the physical size and weight as the bow sensing tech, which together translates into a realistic playing experience. Jumping between the bow and bell is easier, with way less margin for mis-strikes, and everything just feels ‘balanced’ in a way smaller ride pads sometimes don’t manage.

Sound-wise, it’s a tricky trade-off. Where modules once led the way, the memory and flexibility that software sample collections offer now take some beating, but to have that available in hardware is still not cost-effective. However these aren’t generic sounds. They’ve been captured in top-flight studios with tunings designed to complement each voice. Roland has done a great job of presenting its best sounds in the presets, and it’s clear that you’ve got some sturdy foundations on which to build if you’re willing to get your hands dirty in the editing screens. It’s a densely-loaded module, with studio-grade effects and parameters to match, a whole world of signal routing options and, before you even get that far, the voices and their associated editable functions. It’s deep, and while it requires some investment in terms of time, it’s important to remember that creating world-class drum sounds from pads and a brain isn’t a simple undertaking. Put the time in, and the sonic rewards are there for the taking.

When we looked at the Roland TD-17, it was hard to fault. The TD-27 takes the convenience of features such as Bluetooth and sample import – something which Roland held back from in favour of adding it only once it could be done to the expected level of response – and builds on it with some extremely important features that go way beyond the sound in your headphones. What we have here is a glimpse of where midfield electronic kits are heading. No more undersized pads attached to spindly frames as glorified sample play-back devices that you happen to hit with a stick. Electronic kits are resembling our acoustic darlings more than ever, and the TD-27 hits right at the sweet spot of subconscious feel, gelling the playing surface with the sound it creates, and perhaps most importantly to many, a price tag that – while by no-means cheap – isn’t wholly unrealistic.