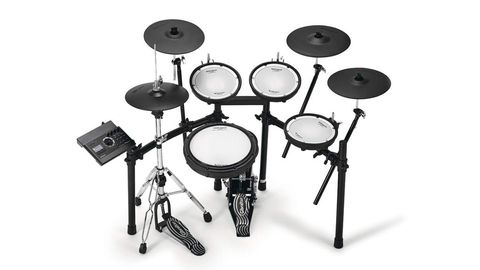 It’s not an entry-level, affordable kit, and the outlay is still a big investment, but the level of sound quality, features and playability sets a new benchmark for those looking for V-Drums they aren’t going to outgrow in a hurry.

We’re only just past the midway point of 2018, but already Roland has unleashed a sizeable number of additions to its range.

NAMM brought us some tasty new models in the Hybrid lineup (the impressive TM-6 Pro, and innovative RT-Mics). But when it came to its own event back in May, Roland turned its attention back to V-Drums proper with the introduction of the TD-17 series: a ‘midrange’ kit that on the surface looks like it packs some serious punch in the value-for-money stakes.

It’s available in three configurations, featuring new pad designs, sounds derived from the flagship Roland TD-50 module, as well as Bluetooth alongside the ability to import your own samples.

Roland’s mantra is ‘We design the future’ and it’s fair to say that it has shaped the way we think  about electronic drums, taking them from the stuff of confusion and discomfort before its V-Drums arrival in 1997 to everyday solutions for practising, production and performance.

The big message with the TD-17 is that electronic drums shouldn’t feel like a compromise to those who are learning and improving on an electronic kit. Hence Roland’s ‘Become a better drummer, faster’ push with its new launch. The module and pad updates seem to offer this, with the playability, sound quality and functionality we’ve come to expect from the big R all ticked off on the spec sheet.

We have the big boy of the TD-17 lineup for review, meaning that everything you see pictured is the full line-up of new physical features. As well as the all-mesh PDX-8 tom pads all-round, there are two CY-12C crash cymbal pads, plus a CY-13R ride pad. Then there’s the newly-designed PDX-12 snare pad, which offers a larger 12" playing surface than the PDX-8 (confusingly, a 10" pad), plus has a raised rim designed to offer a more ‘acoustic’ feel when playing.

Next is the 12" VH-10 hi-hat, a single-pad design continuing Roland’s legacy of stand-mounted hat pads, and the KD-10 bass drum pad, which promises to make less noise acoustically than the previous KD-9. If that wasn’t enough numbers and initials, consider that there are two other configurations.

At the entry level is the TD-17L, which forgoes the pad updates, and includes only a mesh snare - all tom pads are rubber PD-8As, and the hi-hats are the old favourite CY-5 model. Of course, what you get here is the module, complete with its trickle-down from the TD-50, but Roland has also left the Bluetooth connectivity off the TD-17L (TD-17K-L, priced at £879).

In between this and our review model comes the TD-17KV (£1,229), which uses the same CY-8 and CY-5 cymbal/hi-hat pads as the entry-level kit, but your extra cash gets you the updated snare pad, the same mesh toms as our review kit, and Bluetooth functionality. Phew! So, with the introductions out of the way, how does it actually perform?

The first and worst part of setting up an electronic kit is building the rack system, sadly, this never becomes any more fun, but once you’re done, it’s pretty much ‘set and forget’. The rack system is sturdy, and the cables are provided on a loom, all labelled and colour-coded to make it easier when you’re grappling to plug in.

First up, let’s talk about the module. Roland’s habit in recent years is to buck the trend of more-equals-better when it comes to the number of voices within its brains. The idea being that many drummers find a handful of favourite preset kits and sounds, and jump between them rather than needing hundreds of additional sounds that they won’t use. We like the confidence of this approach, and despite initial scepticism it seems to work too, as flicking through the sounds we’re struck by the quality, and then the realisation that Roland’s processing here gives us plenty of decent tweak-ability to the base sounds.

The TD-17 module is an exceptionally clean affair, and while we did find the screen/buttons combo a little bit fiddly at times, there are also plenty of things that have been made nice and easy, particularly if you’re used to the Roland menu terminology and systems already.

Selecting a voice and making tonal changes is scarily intuitive, to the point that we didn’t even have to reach for a manual. It’s all laid out and labelled very cleary along with plenty of dedicated switches for common functions, such as tuning, muffling, ambience, EQ and volume levels, and by using the cursor/enter buttons you’ll be flying in no time.

Sounds aside, the main news here is that the module has Bluetooth, and the ability to import your own samples for playing directly from the pad. The latter is a function that Roland has done so much with in its hybrid line-up, it is surprising that it has taken this long.

The official company line is that it has held off until now to ensure that the hardware is sufficient to eradicate latency issues, however, as shown in our recent Alesis Command Mesh review, the opposition have already been doing this (with no problems to this reviewer’s ears). Either way, we’re glad, because Roland being Roland, the process and ease of use when it comes to loading samples into the TD-17 is undeniably easier. 16-bit, stereo or mono, you can throw whatever wav sample you have knocking about onto an SD card and load it into the TD-17’s pool of 100 user sound slots.

From this point, you assign it in the same way as any other sound, by hitting the pad and then scrolling through. Then comes the Bluetooth. So many drum companies have dabbled with their own systems of allowing you to jam with your native music collection through an app, but this solution is without doubt the best.

Pairing the devices and starting to play along with our Spotify account was fast and faultless, and it was rock solid - with the added bonus of Roland’s tray design on the module providing a home for our phone while we jammed. As they should be: a tool rather than a hindrance.