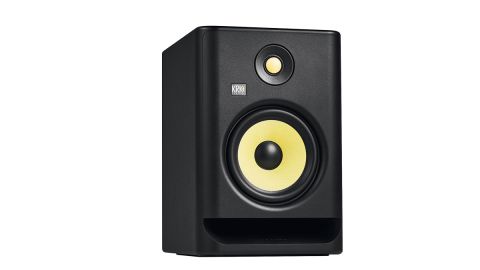 KRK’s Rokit monitors look and sound the best yet, and the RP7 represents an excellent balance of power, footprint and price.

KRK’s long-established Rokit powered monitors have received a major overhaul and the result is a new line-up of four monitors built around 5”, 7”, 8” and 10” LF drivers.

The Rokit RP7 we have for review marks a new size for monitors in this series with a 7” LF driver joining the 1” tweeter (previously the mid-sized nearfield used a 6” LF driver). Still, at 339mm high, the RP7 enclosure is only marginally taller than its predecessor and still fits comfortably within a typical desktop or mixer-based setup. The enclosure itself is a new low-resonance design and removal of the yellow Rokit logo (there’s now an embossed logo on the bass port) and a redesigned baffle with newly shaped letter box bass port give the RP7 a very slick professional look.

On the underside, there’s a thin high-density iso-foam pad, which not only helps with isolation but also provides some table-top friction. Round the back you’ll find balanced input via a combo XLR/TRS socket plus the power inlet and switch. There’s a backlit KRK logo on the front that shows the monitors are powered on. New features continue in the form of a DSP-driven EQ and menu system. Accessed via an LCD and data encoder on the back panel, this handles the room correction EQ as well as monitor level and a couple of other features such as the standby mode and the front panel logo backlight (on, dim or off).

The EQ is 2-band with five fixed settings per band, making a total of 25 combinations. These are designed specifically for room correction so include typical shelving adjustments at 60Hz and 10kHz. However there are also peak options at both 200Hz and 3.5kHz if you feel confident making more extensive adjustments. With the settings selected, the LCD displays an EQ curve so you can see what you’ve done, and the only real gripe is the positioning of the LCD. We simply turned one monitor round, and then when we were happy, matched the settings on the other one.

Sonically, the RP7 is pretty punchy with its default settings. This is great for capturing the vibe on a session, but less suitable for mixing. For that task, we selected -3dB for the low shelf (60Hz). To my taste the RP7 does also sound a bit reserved in the mid range. In the end, we settled on a moderate EQ boost (+1dB at 3.5kHz and 10kHz). It’s great that the RP7 has the option to make these changes, and if you’re in need of some help with setup, there’s also a handy iOS and Android app that helps with orientation and also analyses pink noise to help suggest the best EQ adjustments.

Overall the Rokit RP7 is a pretty decent monitor. It’s well-built and includes enough adjustment options to tailor its sonics to the room and your own personal taste.