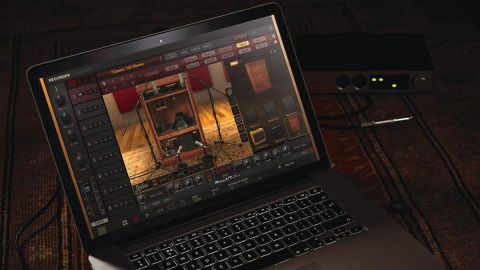 Rotating speaker plugins don't get much better than this.

Think rotary speaker and Leslie is always the name that comes to mind.

Originally designed as an add-on for a Hammond organ it certainly proved cool-sounding on guitar too: check out the arpeggiated riffing on Cream’s Badge for starters.

Now IK Multimedia has collaborated with Hammond USA and Suzuki Music Corp of Japan to create AmpliTube Leslie, a collection of five Leslie amps and six Leslie rotary-speaker cabinets with adjustable mic’ing options. These are all available as a collection to add on to your existing AmpliTube software but if you don’t want the whole lot you can buy the amps and cabs individually.

The classic vintage Leslies - the huge wooden cabinets with the rotating horn at the top and rotating drum at the bottom, - are the 147 and the 122, both of which were powered by a valve amp that could be overdriven for a distinctive growl adding aggression to the organ sound; but it’s also a grittiness that can work well with guitar and the modelling here reproduces that well.

The main deal, though, is that unique rotary speaker modulation with its sense of motion which is faithfully simulated in full stereo - or mono. You get options for 90° and 180° mic positioning, adjustable mic’ing distance plus an overall parametric EQ and, of course, you get control over the fast and slow rotation speed and acceleration/deceleration between the two.

Where the amp was actually an integral part of the cabinet in the Leslie examples IK has chosen, they are separated here for mix-and-match flexibility, with the Leslie amp in AmpliTube’s amp A slot and the speaker in the cabinet A slot in the supplied presets so you get the original combination but you can swap models to get a Leslie amp driving a normal speaker cab or a standard guitar amp driving a Leslie cabinet for a gutsy driven modulation.

Other models include a modern 122 with a more in-yer-face tone, and the powerful 3300w, featuring a solid-state amplifier with a valve preamp. There’s also two of the more portable Leslies - the G37 and the Studio 12 - both currently still available as hardware units. The G37 is the most interesting as it’s designed for guitar and its valve preamp features an overdrive channel with adjustable gain so can get down and dirty.

What’s not modelled here are the sort of Leslies that had just a drum and no
horn, but the mic level adjustment lets you effectively shut down the horn so you are covered and, as there’s already a Fender Vibratone in AmpliTube’s Fender collection, AmpliTube now has probably all the rotary speaker action you could wish for.

This collection is well worth checking out if you want to impart rotary speaker flavour to your guitar but, for anyone who records on computer, it’s also a useful production and mixing tool to keep in the plug-in locker for use with any instrument.