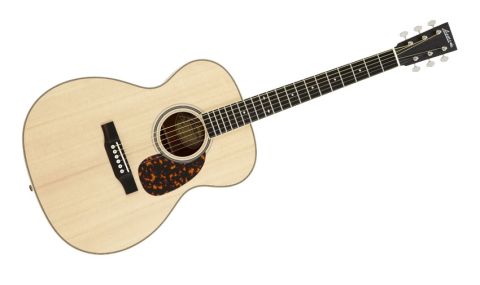 The slightly tighter-sounding OM is our choice for recording and ensemble use.

2013 was a busy year for Larrivée, with the firm providing us with some of the best sounding and playing, value-for-money instruments we've had the pleasure to strum. Now, Larrivée has come up with a new bracing system released on this Legacy Series instrument: an orchestra, with a choice of mahogany or rosewood back and sides - all-solid and with electro options.

"It's a completely different guitar," Jean Larrivée told us. "We've changed the heel and neck profile - everything. If I get bored I get creative. I've been doing this for 47 years, so whenever I get a challenge, it's good.

"The foundation for this new bracing system is our tried and true shaped X brace," he continues. "Each of these X braces is hand- shaped and voiced for the individual instrument and provides maximum strength between the bridge and soundhole. The real secret to the system, however, is the new Non- Symmetrical Scalloped Lateral Cross Brace.

"These braces move away from traditional 'block' shaped braces into lightweight 'tapered' braces with a traditional scallop - think suspension bridge. They are engineered to provide maximum strength using the least possible material and with the smallest footprint possible, allowing free vibration of the soundboard.

"In a standard Larrivée, the lateral cross braces are perfectly symmetrical across the X brace connecting on the treble and bass side, but in the Scalloped Parabolic Hybrid system they connect only on the treble side and travel away at a carefully calculated angle. This change allows us to control the bass response of the instrument."

Aside from its bracing, however, the guitar exhibits the beautifully clean and crisp craft that we associate with Larrivée. It's finished in a thin and super-smooth natural satin acrylic finish that, as we've previously noted, leaves absolutely no room for error. Any slight sanding marks or sloppy joinery become highly visible, and you just don't find any of that on this guitar.

The OM's spruce top is reddish in hue and has some longitudinal striping and a little bear claw 'emblem' in the grain on the upper shoulder. By contrast, the mahogany and sides of the OM look a little bland in colour, but the back's striping is almost exotic.

On the top, there's the classic 'rope' purfling used in the centre of the soundhole decoration: just enough to provide interest, never overstated. There's also quite a thick 'non-shrink' tortoiseshell pickguard.

The top is contrasted by the ebony bridge, which matches the fingerboard and headstock facing. The nut saddle and bridge pins are all bone, while the square-topped headstock features a simple inlaid mother-of-pearl logo and a set of positive feeling Waverly-style Gotoh open-backed tuners.

The neck shapes are pretty similar, too - a deep C, with the dreadnought's shoulders feeling a little fuller perhaps. Both guitars have grained ivoroid binding on the fingerboard edges. This does give a slightly square edge, but it's very much a part of the feel of a Larrivée, such as the compound radius fingerboard and its perfectly installed frets. The construction just shouts thoroughbred.

The neck shapes is a deep C, with the dreadnought's shoulders feeling fairly full. There's a grained ivoroid binding on the fingerboard edges. This does give a slightly square edge, but it's very much a part of the feel of a Larrivée, such as the compound radius fingerboard and its perfectly installed frets. The construction just shouts thoroughbred.

Compared to sister model the Larrivée D-40R, the OM sounds a little muted and 'small' initially, but along with an expectedly trimmer bass end and slightly less high-end zing, the OM's character is actually rather similar to the dreadnought, just a little narrower in terms of highs and especially lows.

Recording gives another perspective. The OM sits perfectly - the mids seem a little stronger, the bass end warm yet crisp and the highs have a little roundness, but still with plenty of spruce-like sizzle. All in all though, it feels very positive, in tune and really responsive.

This instrument again illustrates just how good a maker Larrivée is. Faultless build, setup and playability, with a sound that doesn't step too far from the classic American steel-string, but far enough to make you, the player, sit up and take notice. In particular, for recording and perhaps ensemble use, it simply sits and fits very nicely.

We truly are in the golden age of the acoustic instrument and, yes, there is plenty of choice out there. The thing is that Larrivée, in terms of sounds, build and price, is becoming a very hard act to beat.