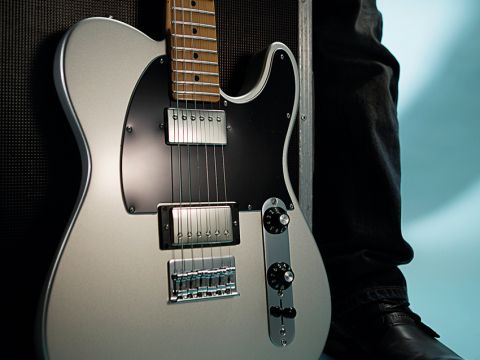 Don't write this modified Tele off as a rock beast. It'll do country, blues, jazz… you name it.

By the early 1970s, the chisels were out and humbuckers were in, no matter what you played. Fender got the message and released the twin humbucker- equipped Tele Deluxe and Thinline in 1972.

The Telecaster HH has an alder body with Strat-like contouring at the rear to help the guitar rest against ribs, or beer belly - whichever it hits first.

It also features a six-saddle fixed bridge with through-body stringing and a control plate that appears to have been put on upside-down.

This has become a common mod for Tele nuts looking for better access to the volume and tone controls. Advocates also reckon that flipping the controls prevents accidental contact with the pickup selector switch while playing.

Many of you will no doubt prefer Leo Fender's original design, but it's all down to personal preference and certainly not a deal-breaker.

The Tele has a three-way pickup selector switch for the usual bridge only/neck only/ both pickups on arrangement. We think Fender has missed a trick by not fitting a five-way switch on the Tele as it did with the Strat, it would have made it much more versatile.

We took a closer look at the pickup wires and they're not four-conductor, so you can't modify the stock pickups to split the coils. Pity.

The neck on the Telecaster HH has a slim 'C' profile that should find favour with most players. Like the other guitars in the range, it comes fitted with a set of Fender Super 250L (0.009-0.042 gauge) strings.

It covers a lot of ground tonally. The neck 'bucker on both guitars offers a warm jazz tone with bags of clarity and little evidence of the muddiness that can afflict similar spec guitars.

The Tele gives an excellent account of itself, offering good depth in the bridge position. Despite its humbucker-based arsenal, it excels when attacked with some country licks.

The bright snap of the maple 'board combined with the beef of that bridge humbucker really works well with pedal steel licks.

It reacts well to heavy-duty filth, too - if you think you need a pointy rock guitar to make eardrums bleed, think again. It would be great to see a hardtail version of the Strat added to the Blacktop range - we reckon it would be pretty special.

Some will see the Blacktop Series as a cynical marketing ploy designed to squeeze a bit more juice out of some very well-established designs. We did wonder about that, but what we discovered was an excellent guitar: the Tele represents one of the best instruments to come out of the Fender factory in Ensenada, Mexico. The build quality, playability and tone on offer are fantastic for the asking price.