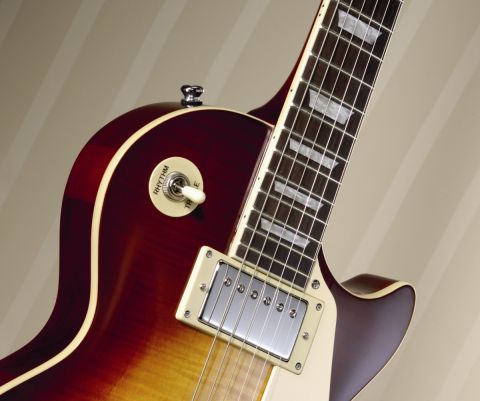 A fine instrument with LP-like looks and tone. Worth checking out!

The demand for Epiphone means that the instruments are sourced from numerous factories in both China and Korea.

Although Epiphone has set up its own Chinese factory, this sample hails from another OEM factory: the DaeWon China factory in Dalian, northern China.

Origin aside, this review model is a great-looking piece and must be the first choice for so many players who aspire to owning a classic guitar but simply can't afford the proper USA-made Gibson Les Paul.

It adheres closely to the classic LP recipe. It's a weighty guitar, but that's primarily due to its 60mm deep body.

It's not easy to work out what this beast is actually made off, although Epiphone state its body is "mahogany/ alder" with a "flamed maple" top.

Removing the pickups usually lets you see what's what but here the cavities are painted black. Removing some of that paint, however, you can clearly see that the "flame maple" top is a veneer on top of what looks to be an entirely mahogany body, even though the top is a separate piece.

Typically the neck isn't a full width tenon into the body but Les Pauls have been made in this fashion for decades.

The woodworking is smart, outwardly at least, and there's clearly a mahogany-like veneer on the back as the grain simply doesn't match the wood joints visible on the side through the brown translucent finish.

However, the guitar is nicely made and retains the bulk and weight of a typical USA model.

With its cream plastic pickguard, tune-o-matic bridge and stud tailpiece, not to mention its classic four control layout, the guitar looks quite crowded but that is, of course, all part of its iconic appeal.

Mind you, that pickguard is easily removed and, with such a good-looking front, we'd guess quite a lot of players would do away with it.

Again the neck is very tidily fitted to the body, although there's no contouring of the body heel; the shaping is more rounded and slightly thinner at the first fret (20.7mm) and chunkier at the 12th (23.2mm).

The Grover tuners here feel a little slack but a stiffer feel is easily achieved by tightening the kidney buttons.

The twin covered humbuckers (a Hot at bridge and 57 at neck) look the part, and wiring is stock with the shoulder mounted toggle switch and its cream rhythm/treble ring, volume and tone for each pickup and plastic plate mounted output jack.

The Epi Les Paul has power but sounds a bit veiled in the high end, and there's no mistaking the dark largeness to the sound.

So long as you don't want your sounds too high-gained, where it becomes a little indistinct, this is a great sounding, if a little dark, Les Paul.