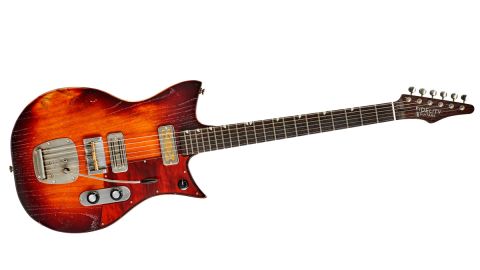 Heaps of cool with sounds to match.

Let’s face it, whether you’re a musician or a guitar-maker you have a choice between imitation or trying to make your own way.

The former could mean you’re in a comfort zone and (more than likely) means you’ll get paid, while the latter original path can be a harder road to travel. It’s that second road that Cambridge-based maker Matt Oram has chosen to plough with his stylishly unique and hugely characterful retro-styled Fidelity guitars.

It’s been a little over a year since Matt unveiled his original Double Standard design followed by the JB (named after his brother-in-law, John Barlow). Both guitars are eye-catchingly different.

The original 21-fret Double Standard employs a longer ‘Fender’ scale with a body width of 315mm, the out-splayed pointed horns slightly asymmetrical. Although the 39mm-deep body looks solid, the swamp ash is actually chambered from the top then sealed with a separate 5mm piece of swamp ash - with mirrored cavities either side of the solid centre - resulting in a trim weight.

The guitar can be ordered with hardtail or vibrato (£1,799 and £1,999 respectively). Our Double Standard comes with a Mastery MV vibrato and uses Matt’s own-design open-backed bridge.

Yet it’s the finish that draws our initial attention. The Double Standard’s Blood Orange nitro finish - a clear orange ’bursting over the darker Oxblood - is aptly named and lightly relic’d too. It sinks into the bold grain of the ash and certainly won’t be for everyone.

As much as the body shape and finishe polarises opinion, so to will the neck. The guitar uses a one-piece wenge (maple is an option) construction with a rear zebrawood stripe to cover the route hole for the truss rod. It fixes to the body, with bolts not screws, into threaded brass ferrules inset into the necks.

Truss-rod access is behind the nut and the head is quite small and minimalist. While the staggered-height Gotoh locking tuners with grommet-style bushings are an excellent choice and provide plenty of back angle behind the nut, Matt prefers to use a string-tree on the upper two strings to maximise down pressure over the nut. And, like the frets, both bone nuts are beautifully fettled and polished with rounded edges.

The neck shape however, might divide opinion - the nut width is (slightly) on the thin side of Fender standard, string spacing is a little cramped at the nut - approximately 34.5mm - although that opens out to modern spacing at the bridge.

The impression to your hand, however, is of thinness both in width and depth. For example, the Double Standard’s neck measures around 21.3mm at the 1st; 21.8mm at the 12th, which is pretty mainstream, but the depth drops noticeably just under the 2nd and 3rd frets to a skinnier 19.6mm. In combination with an asymmetric shape, that becomes more noticeable as you move up the neck with more shoulder on the bass side, it’s not going to be for everyone.

While this model can be ordered with pickups of your choice, Matt favours units from Mojo - as here - or The Creamery (both made in the UK). The Double Standard goes for a Gold Foil Soapbar at neck and a P90-sized Mojotron Blade at bridge: both screwed to the body. The JB plumps for a set of Mojo’s mini humbuckers mounted on the large black ply scratchplate.

Control set-up, meanwhile, sees large knobbed volume and (no-load) tone controls on a reduced Tele-like aluminium plate, while the knob on the tip of the treble horn is a four-way rotary pickup switch that selects bridge, both in series, both in parallel, and neck.

All the metal parts are nicely aged to match the light relic’ing of the bodies - this guitar unquestionably captures a vintage vibe and certainly looks like it has already been on a gig... or three.

There’s a good light weight to this instrument; it is comfortable enough on your lap, very slightly neck heavy strapped on but nothing you can’t manage. It sounds lively acoustically too, although the Double Standard’s vibrato provides a relatively shallow back angle to the saddles - something that offset players will recognise - and, yes, a little more neck pitch would maybe eke a little more sustain, but, in combination with the pickup choice, it all pulls together for a dish that seems to evoke instant effects-laden indie that’s glorious.

If you’ve not tasted Mojo’s wares we recommend it. There’s authentic Gretsch- meets-Rickie, with Tele-like punch, from the bridge pickup; a softer but clear voice from the neck and a pair of controls that are really well graduated. The no-load tone is a real tone key and helps to pull down some of the steely Tele-like highs if you need.

Again not everyone will get on with the rotary pickup switch (which is nowhere near as fast as either a toggle or a lever), but the fuller, louder more Dano-like series linkage works well on both to provide a fat-but-clear sound that’s contrasted by the more open and lower output parallel mix. Both selections add to the character that summons up a host of voices - Danelectro, Gretsch, Fender, Rickenbacker, Supro - and consequently suit anything from reverbed and tremolo’d cleans, fuzzier punk/garage rock grit, to clean-edged classic rock, all informed with a chime and jangle that’s bright yet musical.

If our ratings were based on vibe alone this stylish retro-themed piece would score 5. Design aside, it is nicely put together, with top-drawer hardware and pickups, and an individual handmade feel that’s the antithesis of the ‘sterile’ modern production instrument. Bland, in either style or sound, it most definitely is not.

Price? Although far from impulse purchases this guitar includes a smart aluminium, shaped hard case and a Heistercamp leather/cotton webbing strap and, of course, can be custom spec’d, with the quoted prices, to a large degree in terms of voicing and finish.

We’d be tempted to go for a more mainstream neck shape and would probably spec a lever switch to select the pickups, but both features are part of the different drive that, bundled in with the cool looks, makes for such a hugely attractive proposition for the right player.

Put bluntly, if you hanker for different retro-informed sounds and are bored rigid by the instruments offered by too many major brands or indeed are stunned by the stellar prices of numerous US ‘boutique’ makers, here’s a hugely valid choice.