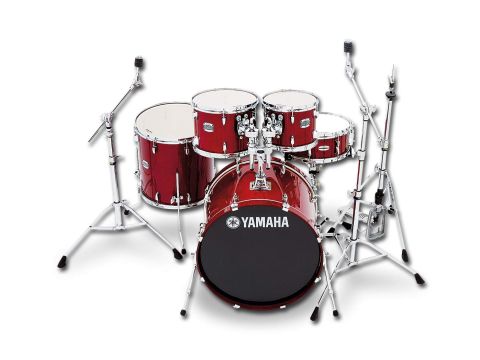 Yamaha's current reputation was founded on birch drums, with the famous Recording Custom Series introduced at the close of the '70s. Although there was nothing new about using birch to make drums (European manufacturers have always done so), Yamaha cleverly promoted this beautifully constructed series as the ultimate recording kit.

It also helped that Steve Gadd came on board as the company's ultimate endorser. Previously, Yamaha's Stage Custom Series, first seen here in 1995, had an oak or birch veneer over plies of Philippines mahogany and falkata. It's taken until now for Yamaha to make a budget kit entirely in birch.

The talking point here is the all-birch shells and they're superb. Bearing edges are expertly cut, with a razor-sharp 45˚ to the inside and a smooth curve-over to the outer wall. There's a light seal on the pale honey-coloured insides, with a tiny bit of unsanded nap left for timbre.

The grain pattern of the birch is mundane as always, but the transparent lacquer over the cranberry red stain of the review kit was flawless. Yamaha badges always look corporate, but this new one is rather attractive - tasteful silver and grey on a black-backed plaque (try saying that with false teeth) that stoutly proclaims the kit as 'Made in China'.

A few years ago, that fact would have been kept quiet, but today it increasingly denotes a well-made product.

One sign of cost-saving is the presence of 16 rather than 20 lugs on the bass drum. There are also no plastic or rubber mounting gaskets beneath any of the lugs - a refinement we've come to expect. The lugs are now proper, low-mass, chromed-metal jobs, replacing the FRC (fibre-reinforced composite) of the previous incarnation.

Yamaha's YESS isolation mounts are small and relatively unobtrusive. Whereas RIMS-style mounts have extended brackets floating off the lugs, the YESS mount is simply held by two bolts, fixed at the nodal plane of the shell.

While you may wonder about its strength, we've never heard of any breakages. Incidentally, the newly designed mini-floor tom leg brackets are also mounted at the nodal shell points for increased sustain. The full 700 Series hardware package that is included looks handsome and has all the refinements you'd hope for.

Yamaha's astute marketing of birch drums back in the '80s fostered - or, more accurately, foisted - the idea that birch was the best choice of wood for recording, claiming that the RC-9000 sounded 'EQ'ed'.

This is now also true of the Stage Custom. The snare comes with a 3/4" (19mm) wide perimeter 'O' damper that effectively chops out the ring from shell and metal hoops, leaving you with a taut, dry and crisp beat.

You just know a close-up microphone will deliver a sharp and punchy sound. Actually, for today's tastes, the complete 'O' is heavy-handed. A third or half circle is plenty to give you a dark, fat beat while retaining a healthy dollop of ambience.

Fitted with clear Yamaha 250 Ambassador-type batters, the toms also sounded great straight away. The birch flavour is that little bit darker and more aggressive than maple to our hearing. You get a commanding slap, the sustain is just right and you'd be hard pushed to find a tom that gives you less grief to tune.

In the interests of a scientific comparison, we set up a Yamaha RC-9000, with its more rounded bearing edges and pre-YESS mounts, right next to the shiny Stage Custom. The toms sounded extraordinarily similar.

The bass drum has Yamaha's slightly unusual 17" depth, giving plenty of bottom without losing the definition. It retains an immediacy that starts to get lost as modern bass drums get ever deeper.

I found it to be similar to the other drums - controlled, with good warmth allied to an impressive crack. The 16 lugs are just enough to hold the tuning and aren't a great burden on the shell, so it feels more open and light.

The 700 Series hardware is sturdy without being over heavy. The single braced tripods of the cymbal stands may prove slightly wobbly if you're a brutal basher, but otherwise everything's dependable.

The inclusion of two interchangeable straight/boom cymbal stands is generous and the tilter design has been improved, but there's a slightly superfluous memory-lock that slots into the top section housing to fix your boom extension.

The chain-drive bass pedal is smooth, although the hoop-clamping screw underneath the footboard is awkward to reach. The felt beater felt perfect to us, but others might have appreciated a double header with interchangeable plastic face.

The hi-hat has a stepped tension ring, which does exactly what it's supposed to do. We particularly like the continuous screw-clamp tilter on the snare stand rather than the usual geared type. Some may think the latter is more stable, but can you ever quite get the angle you want?

Setting up and taking down is probably faster and more efficient with the Yamaha system than any other, the only downer being that there's reduced lateral reach because of the YESS brackets. It won't trouble many people, but it's a minor design weakness in an otherwise exemplary set.

What we like best about this kit is the classy, uncluttered design. The result of years of experience and refinement, the 700 hardware is simplicity itself, quick to set up and break down. The birch shells are excellent and the sound is exactly as you'd expect - immediately pure, punchy, dark and warm.

The birch shells provide that extra touch of control that makes tuning easier. Any relatively inexperienced drummer coming to this kit can't go wrong really. Here's one budget kit that should never suffer the indignity of being plastered in tape in a clumsy effort to make it sound decent.