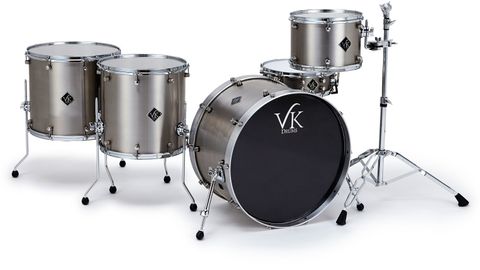 Drums of this build and expected longevity are costly but, you can be assured, nobody else will have a set like this one - and it will last you a lifetime.

His bespoke drum company (formed only two years ago), is based in the industrial city of Sheffield. Where better situated than in a city renowned for its stainless steel? After moving to Sheffield, he says,

"I found myself in the perfect place to do the stainless steel things I'm doing with drums. I've always loved tinkering with drums and taking things apart to see how it all works, and being a drummer too."

The toms and bass drum are formed from 1.5mm-thick sheets of stainless steel which are rolled, welded and the resultant weld seam smoothly polished out. The snare drum is constructed from 1mm-thick grade 1 (aircraft grade) titanium that undergoes a similar hand-manufacturing process.

This drum is fitted with the superb VK own-designed throw-off which has a front-release flap and adjuster. The simple but ingenious lever is designed to lock into position by the tension from the strainer wires. All of the drums are fully customisable with fine user detailing - for example, the lever can be etched with a band logo or your own initials.

Each drum features solid hand-polished stainless steel lugs which have a single-point bolt. With the exception of the laser-cut components (made from Alan's engineering drawings), the bass drum spurs and the triple-flanged hoops, every last piece of the kit is engineered and hand-assembled by VK Drums.

The shells of the review drums are fitted with an XLR socket - unfortunately for review, there are no mics mounted in the review set so we can't hear how these beauties sound through a beefy PA.

However, VK offers a KAM R1 mic together with an XLR socket fitted for only £50 per drum which seems great value for an internal mic system. There are plenty of design elements worth a mention including bass drum rim attachment, VKey drum, VK snare throw-off and those hand-polished round mini-lugs.

Though this 24" chunky kick is incredibly heavy, it's not so weighty that it's impossible to lift - though we must admit, we don't really think the aluminium hoops have made much of a difference.

We can see from the wear on the drum head the drum has been used with a double pedal and that is exactly what we are going to use - this beasty warrants it! The heads are quite tightly tensioned so we would have expected a good bounce, but the power and depth that is pouring from the drum is a complete surprise.

Of course, both the toms and kick have an expected underlying metallic essence which is loud and open - the sound reminding us of a stainless steel Ludwig kit a friend owned a few years ago.

Fortunately the EMAD dampening on the kick helps the drum recover quickly from my double-pedal onslaught and a slice of Moongel on the toms sees them slightly restrained but not in the least bit stifled.

Each drum is extreme and gutsy which, we are told, projects like crazy. Both floor toms are ballsy enough to crack walls while the bass drum could destroy whole buildings - shaking everything in its wake.

Due to the fairly shallow depth of this snare drum and Puresound snare wires, it only requires the slightest tickle before the opposing snare head shows its sympathetic response.

Seamless buzz rolls are readily available - virtually by just laying the stick tips on the tightly-tuned head. A few strikes followed by some delicate but impressive ghost notes are smugly satisfying. So too is the immense power available as laying into the drum rapidly cranks up those dBs with its incredibly powerful metallic drum sound - not a kit to be used near a sound limiter!