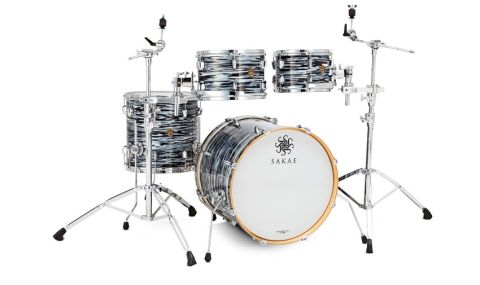 Sakae's Trilogy, with its thin three-ply shells and reinforcing rings, is markedly different from anything the company previously produced. Excellent drums, hand-made with real flair.

Early in 2013 shock waves went round the drum world when it became known that the company that had exclusively produced Yamaha's high-end drums since 1974 was going it alone.

Sakae was originally founded in 1925 in Osaka, Japan, and produced school percussion instruments up until 1974 when it partnered with Yamaha to build quality drumsets.

And what a fruitful partnership that has been, sparking a drum style revolution in the 1970s and always maintaining exceptionally high standards. But from 2009 Sakae started to make its own drums and drum kits and now feels it's time to fly solo.

For Sakae to make its own mark it will have to explore different directions. Trilogy does that in its all-important shell construction, by boldly opting for a vintage-style shell, a thin three-ply affair with reinforcing rings.

The Trilogy shell consists of three maple-poplar-maple plies. Such a thin shell needs reinforcing rings, in this case four-ply maple on toms and six ply on bass drums and Trilogy snares.

This is a step back in time, recalling the shells made by Ludwig, Slingerland and others up to the 1960s. The difference is those companies often used mahogany as well as maple, and their reinforcing rings were solid, not ply.

As befits modern methods Sakae uses thin ply to fashion a daintier reinforcing band. You get the strength but not the bulky bearing edge which some feel blocks too much of the cylinder. This method is also cheaper and lighter.

Including the re-ring, tom shell thickness comes to about 7mm, making the actual shells somewhere between 3mm and 4mm, which is thin by any standards. Sakae president Enzo Nakata points out that, unlike some other companies Sakae's bass drums remain at three ply, with just the re-rings bulking up to six plies for stability.

When asked about construction details Nakata says Sakae prefers to keep this secret. So all we can tell you is that the Trilogy shell appears to follow tradition again in using scarfed (tapered) joints, as opposed to the end-on butted seams of straight-sided shells.

Unlike with vintage shells (eg: 1950/60s Ludwigs) and their highly visible lap joins, we had to take a magnifying glass to the Trilogy bearing edge to see the join, it is that neat. We also found these beautifully crafted shells accurately round to within a maximum 1mm tolerance.

As a further nod towards tradition the shells have an inner silver-grey paint sealer, this time reminiscent of Gretsch. Retro-style thin shells with reinforcing-rings have also recently been offered by Ludwig (Legacy), DW (Classics) and Tama (Star), amongst others, and are in keeping with the trend back to classic looks and sizes. Our review kit has 20"x16" bass drum, 14"x14" floor tom, 12"x8" and 10"x7" mounted toms. Alternative Trilogy series shells all follow classic sizes.

As for mounting hardware, the small toms have Sakae's cradle system whereby the RIMS-style steel bracket is attached to the bottom lugs rather than suspended from the top hoop, which is the more usual method.

Otherwise the mount follows the familiar Yamaha hexagonal rod with resin ball and clamp design. It has the one touch positioning 'wrist lock' clamp, but suffers from the problem that Yamaha's mounts always had - that there is limited horizontal reach, extending a mere 55mm (21⁄4").

The thing about extremely thin-walled shells is they reverberate more than thicker shells. The result is a 'bangy' sound, a bit rowdier than the sound of thicker shells. But then the reinforcing rings contain the unruliness, while the rounded bearing edges make for a slightly softer attack, a warmer, darker tone.

The reverberation is dramatically demonstrated by the undrilled bass drum. Lacking a tom mount the drum is light as a feather. Pick it up by the hoop with a couple of fingers and wallop the batter dead centre with the thick end of a stick and it resonates like a big tom. You feel the whole drum shuddering, making the strongest case for drums having thin shells.

The ubiquitous Remo Powerstroke-3 is such a familiar sound now and dominates the tone with its dry-ish thump, but having the full single-ply front head allows you to maximise the sustain and round out the tone.

There was a period, leading into the 1960s, just as engineers began recording bass drums properly in rock, when something almost like the hard knock and high pitch of bebop-style bass drums featured on classic rock records.

The bass drum found its voice in rock at this time with Earl Palmer, Charlie Watts and on to Al Jackson - a terse sound unlike the deep fat thump of today's myriad upfront kick choices, but a sound that is coming back, from indie to gospel to electro. This bass drum will give you that sound, even more so if you fit an Ambassador batter and keep the front head intact.

All of this applies equally to the toms. Tune them right around the middle sweet spot, pick them up by the rim and slap them hard. They sustain forever. Tuning is fast with the cleanly finished bearing edges and the traditional light and resonant 1.6mm hoops. The warm tone of the coated Ambassadors and the smooth attack of the rounded edges is perfectly balanced by the brightness of the maple.