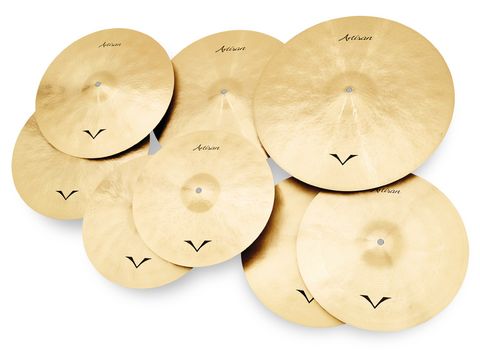 With the original Vault Artisan rides, these crashes and hats complete a wonderful, musical set - they are very close to perfection.

Sabian has built up a massive inventory of cymbals with which to tempt us, but the Vault Artisan collection is still something special.

The Vault is Sabian's experimental lab where its master cymbal-smiths try out new ideas. Thus the Vault series encompasses those special, creative cymbals which don't fall into Sabian's standard categories.

Sabian's intention with the Vault Artisan models is to capture the darker, less abrasive tones of vintage cymbals while also adding a touch of modern, biting edge brilliance. We loved the original Vault Artisan rides and inevitably Sabian was pressured to introduce matching crashes and hats.

Sabian says drummers were looking for "that soft, warm, deeply musical tone" and, in order to capture it, vintage cymbal designs were researched and plundered.

All Vault cymbals are hand crafted from B20 bronze which is 'fire refined' so as to leave a trace of silver embedded in the copper. There are two Vault Artisan crashes, a 16" and 18", which are described as 'thin/extra-thin' in weight and profile. These are not to be confused with the previous Vault crashes which have the Sabian logo and a brilliant polished finish.

The Vault Artisans have traditional high-density hand hammering for tonal complexity and increased projection, augmented with jumbo-peen dimpling which brings out the low end tone.

Rounding out the Vault Artisan set, Sabian has added three Artisan hi-hats, with standard diameters of 13", 14" and 15". Each pair has a medium weight top cymbal coupled with a heavy bottom. The top and bottom look the same, with the script 'Artisan' and 'V' for Vault logo. All the Vault Artisan cymbals have a classic satin finish, shallow lathing and high-density hammering to both sides.

Each cymbal bears the signature of its craftsman maker and a serial number on the inside of the cup. Each also comes in its own soft carrying bag containing a letter of authenticity. This takes the form of a small certificate, again with serial number and signature of the Vault Team specialist craftsman.

The relatively thin weight of the two crashes gives the cymbals a deeper pitch and shorter sustain than average. Both crashes are extremely fast reacting and the overall sound describes a smooth arc from the initial sharp smack, through the quick blossoming of the full tone and breadth, to a long, even decay, ending in a silvery softness.

In a word, gorgeous. Being thin, the main body of the crash lasts for only a short burst - then the volume drops quickly before the protracted rake-off. There is absolutely no descent into clashing after-tones, hums and buzzes. Which is not to say the timbre is not complex, just harmonious.

In fact, at first the sound may seem so smooth as to be almost bland. But this may be the jaded result of experiencing so many run-of-the-mill cymbals which were disappointing in one way or another.

The 18" has more of a trashy, thin and metallic initial crash, which is underpinned by a warmer and darker spread. The 16" sounded even purer than the 18" - if anything more unified, crashing with a sublime clarity. You simply don't just whack these crashes recklessly, you ﬂip a glancing wrist and savour the beautiful silky tone.

These are cymbals to be cherished. It would be heinous to take anything but a small to medium stick to them. As such they are more likely to find favour with colourful jazz and groove drummers than out-and-out rockers.

However, whereas the crashes are not for heavy thrashing gigs, the hats are made of sterner stuff. They're thicker and will hold up to fierce playing if necessary. And yet they match the crashes beautifully - as they do with the aforementioned rides. We tried the 13" pair on a rock gig and was rather surprised just how sharp they were when opened and shouldered. They're real sizzlers, bright and spirited.

The 15" pair are the most buttery, deep and mellow. We couldn't believe how pithy and yet thick the closed sound with the tip of the stick was. Part-opened, they emit a huge wallowing slush - a steam engine of power. But in the end, almost predictably, we settled on the 14s as the perfect compromise pair.

They have a superbly authoritative pedalled chip, dark and fat, yet still edgy and sonorous. All the hats can handle a wide dynamic range - tickle them and the sound is clean, lay in and they never wash out or turn ugly.