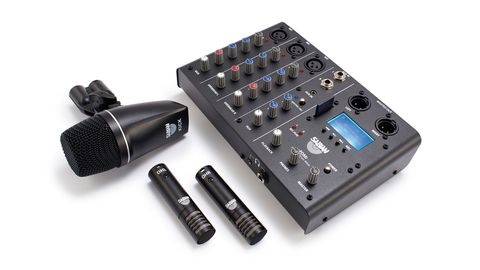 With the Sound Kit, Sabian has branched out from cymbals, and delivered one of the most useful products of 2016. Just add cables and stands!

If you've ever attempted to record drums, you'll know the following to be true; guitarists have it easy.

First, you'll need to get your kit sounding great, then add in a computer, software, an audio interface with enough mic inputs and a pile of mics.

However, Sabian knows something else to be true about recording drums: not everyone wants to use a 10-mic set-up or learn to operate the gear you need to do it.

The popularity of YouTube, and onslaught of social media, means people want to record their grooves quickly, but with a better solution than the mic on their phone or camera. Enter the Sound Kit; part drum-mic set, part mixer and part digital recorder which made its debut at NAMM 2016.

These are met by the centrepiece of the kit, the PDMr (Personal Drum Mixer). This compact box measures 33.5cm wide, by 15.5cm deep, and includes three channels for the mics (each with two-band EQ), plus an aux-in for things like a click or backing track.

All of these inputs can be sent to the left and right master outputs if you're using the kit live. The third part of the mixer is the recorder section. This accepts any standard SD card, and will record your playing as a 320kbs MP3 file.

Let's start with what this isn't: a multitrack recorder, so what you record to your SD card is what you get. You can't change the levels of your individual drums after the fact.

If you're already thinking, "Well, I can do that on my phone..." then slow down. Remember that what you're getting here is designed for a purpose with simplicity, ease-of-use and a price-point in mind.

The first thing we're greeted with is Sabian's simple guide to a microphone technique that'll help you get the best out of the Sound Kit.

It's based on the Recorderman method, which is an adaption of producer Glyn Johns' famous drum miking technique. The simple rule is that the more microphones you add to a set-up, the more you'll risk encountering problems with phasing.

This is where the sound from your drums hits the capsule of each microphone at different times and causes clashing frequencies to drop out. Sabian's version of the Recorderman method, however, keeps it simple by using three mics, all equidistant from the kit to minimise this problem.

It involves some simple measuring using the included Calibration Cord (a piece of string) to achieve the optimal position, and, if you do it right, a clear, balanced and phase-free transparent kit sound.

Next up are the mics. The SOH2s are a matched pair of small-diaphragm condenser mics measuring just 9cm long. This type of mic is designed to pick up a wider frequency range than dynamic mics (like the trusty Shure SM57), and as such make great overheads for capturing the sound of your kit.

Their small size means they stay out of your way when hoisted above the kit, and they're so light you won't experience 'engineer's droop' from your mic stand. As a nice touch, the included stand clips are fitted with dual-threaded inserts meaning you won't have to waste time trying to find one when you attach it to the wrong sized thread on your mic stand (which, let's face it, is every time).

The bass drum mic is a dynamic model; rugged, capable of handling high sound-pressure levels for close-miking your kick drum, and has its own hinged clip built into the casing. This is both a blessing and potential curse as it means that while you'll never forget your clip, if you break it, you'll have a problem.

On top of this, the XLR connector is part of the same mould, and connects to the body of the mic via an exposed shielded wire. It looks solid enough, but there is a risk that after enough stress over the years, it could break.

In use, the Sound Kit couldn't be simpler. All of the mics and channels are labelled, so making all of your connections is a doddle. Following the mic-placement guide means you can get your mics and levels set up and be ready to go in minutes.

With an SD card in the slot, it really is as simple as pressing record when you want to start recording, then stop when you're finished. After that, you can play it back in your headphones, then transfer the card to your computer to do what you like with it.

It's not all about fidelity though. Ask any teacher about ways to improve and they'll recommend recording yourself playing to a click. It also serves as a way in for those wanting to take closer control of their live mix, plus it teaches you the basics of signal paths with the analogue mixer.