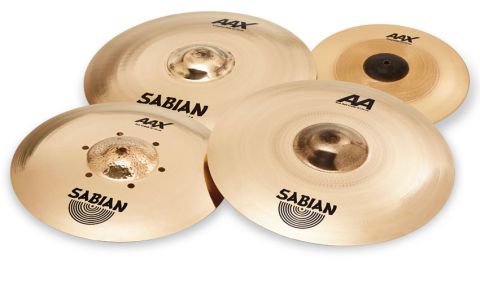 Another top collection as voted for by everyday drummers worldwide. Iso and Raw Bell crashes are bright and colourful, the X-Plosion ride and Freq Hats multi-purpose, warm and musical. Winners all.

Sabian's clever marketing idea, to run an online public vote for the most popular of its latest cymbals to promote, enters its third year.

The AAX Raw Bell crashes are available in brilliant (pictured) or normal finish, while the similarly proportioned AAX Iso crashes are all brilliant. The Isos have six 1⁄2" holes drilled just beyond the heavily hammered, dimpled bell. The Raw Bell crashes have large, unlathed, polished bells. With similar proportions, the AAX-Plosion ride also has a 51⁄2" (14cm) polished and unlathed bell.

All these cymbals have fine lathing top and bottom, leaving the AAX Freq hats the odd guys out with their raw bells and dual surface - a fine lathed outer band and grainy, scratchy inner band, the same finish on the top and (heavier) bottom cymbals.

We immediately loved the AAX Iso crashes. The name Iso is short for isolation, the six holes partially isolating the bell from the body. The bells do indeed seem detached and resultingly clean sounding. The heavy hammering made these Iso bells our favourites, with the deepest bells on the cymbals reviewed here.

Being large they also increase volume, while the small holes only marginally shorten the overall decay. Also because of the holes the Isos have the character of thin cymbals although actually medium-thin in weight.

Unlike Sabian's now familiar O-Zone crashes, which have large 2" holes resulting in a trashier sound, the Isos have a purer brighter sound. Each of the three has a distinct personality too - the 16" is perky and fast, the 18" zings, the 20" is deep and masterful.

Compared with the Isos the three Raw Bell crashes have a denser tone, more 'boosh' and less 'tish', broader and fatter. Being pretty thin they are also fast responding, but they feel a little more substantial, fuller and bigger, slightly louder and imposing.

Check Mike Portnoy's online demo where he crash-rides all three at www.cymbalvote.com - a furious workout which shows the full tone and impressive strength of the cymbals. In fact you can check out all the cymbals at Sabian's dedicated site, as Sabian's star players, including Chad Smith, Rodney Howard and Todd Sucherman give them a pounding.

Now for the two individual vote winners. The name X-Plosion ride might lead you to think this 20" would be hard and aggressive. Not necessarily so - riding near the outer edge the tone is warm, the stick tip feeling cushioned and soft. Crash-riding here delivers a dark whoosh, still with supple stick clarity, and this being a relatively light cymbal, deeper than the two 20" crashes reviewed above.

Moving up closer towards the bell the sound gets tinnier and sharper, harder with more 'ting' - it's definitely a two-in-one ride. Wherever you tap, there is always a good spread and enough wash to support the ride notes, making this a musical cymbal, not a clanger. It sizzles without feeling thin or weak. The bell is distinct but not divorced - it too has a warm, middly peal, easy on the tinnitus. Overall, you perhaps wouldn't call this an obvious jazz cymbal, but it is that versatile and will find a home in plenty of styles.

Finally, the 14" Freq Hats are not only snazzy looking, but snazzy sounding - a toppy, distinctive tone, sharp and stylish without being aggressive. Freq is a wordplay on 'freak' and 'EQ'... cute, but you shouldn't take it too seriously. These hats are not freakish, they are musical, crisp, possibly a little thin-toned, but snappy with it.

The 'EQ' tag we suppose indicates recording-ready. In fact Sabian suggests the raw bell and special lathing 'gate' the attack, which would indicate a shortening of sustain, a controlled sound. That seems fair, but don't take sharp to mean harsh - yes, they cut, but like the X-Plosion ride what struck us most was the warmth, particularly on the open-closed 'shoop'.