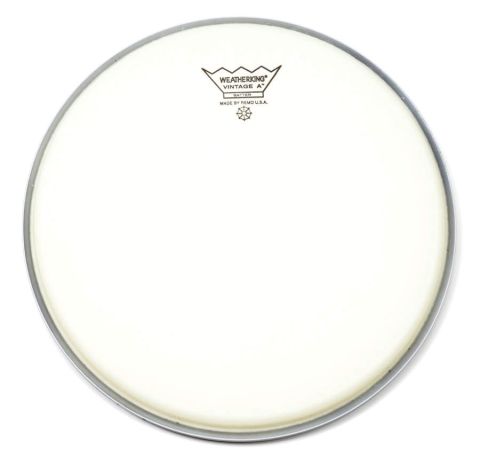 While there is no shortage of heads on the market, the Vintage A heads do offer something different. Somewhere between regular Ambassadors and Emperors but with an added twist, they are a graphic illustration of just how much influence a head has over the sound of a drum.

Vintage A heads were launched in 2007 to coincide with the 50th anniversary of the manufacture of the company's ﬁrst synthetic heads. For 'launched' read 're-launched', as Vintage A's are replicas of Remo heads that were last available nearly half a century ago.

Up until the late 1950s, drummers relied solely on calf heads which, although they brought a warm, thick sound to drums, were all too susceptible to changes in temperature and humidity. The technology that enabled the ﬁrst synthetic heads to be made was thanks to advances made during the Second World War and the ensuing Space Race. The polyester ﬁlm Mylar was created by DuPont and used in wartime reconnaissance ﬂights and then by NASA (one of its legacies is the rolls of cling-ﬁlm found in every kitchen).

Mylar is durable, inexpensive and, most importantly, weather resistant. The ﬁrst synthetic Remo heads were thus created. Mylar was then only available in two thicknesses - 7.5 mil and 3 mil (1 mil equating to 1/1000th inch) - so the thicker variety was used for batter heads while the thinner sheets were ideal for the resonant side.

"They are not as crisp as Ambassadors but are wonderfully warm and resonant; in fact, very reminiscent of the calf heads that they were originally designed to emulate".

The heads were christened Weather King - the name that still features on Remo heads - due to the fact that they were unaffected by climatic conditions. By 1959, with rock'n'roll in full swing, drummers were demanding louder and longer-lasting heads, so Remo combined the two thicknesses of Mylar together on the same head. This new head was named the Ambassador (while the original 7.5 mil single-ﬁlm head became the Diplomat).

It is this two-ﬁlm Ambassador that Remo has resurrected in the form of the Vintage A.

Ironically, the ﬁrst Ambassadors didn't have a very long product life, as less than 18 months later Dupont introduced a 10 mil-thick version of Mylar which was used to make the Ambassador heads that are essentially unchanged today. Vintage A heads are suitable for snare and tom use and are available in 10", 12", 13", 14" and 16" sizes only.

We tested them alongside regular Ambassadors, and the results were delightful. They are not as crisp as Ambassadors but are wonderfully warm and resonant; in fact, very reminiscent of the calf heads that they were originally designed to emulate. Think of a typical '60s drum sound with the drums open and ringing, and you're about there. Our only complaint is that Remo has no plans to introduce bass drum sizes.