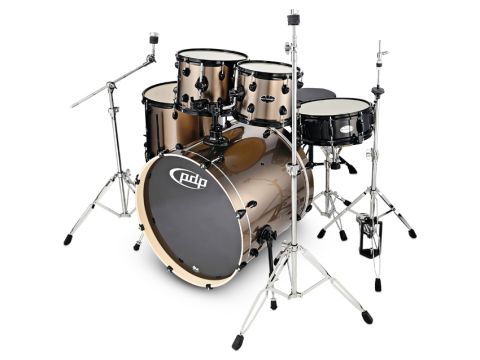 At over £500 the Mainstage kit is at the upper end of the entry-level price band, but still represents good value for money. It would appear to have been designed as much to a drummer's specifications as it has to meet a price, and, as we've come to expect from PDP, the build quality is faultless. We took the kit to a couple of rehearsals and only revealed its price at the end of the night, where a degree of surprise ensued. The unmistakable brand heritage of PDP and DW brings added allure, but the Mainstage is an accomplished set of drums regardless.

In a little over a decade, Pacific Drums And Percussion has become a big player in the mid-range sector. Benefitting enormously from its close association with DW, PDP has nonetheless established itself as a standalone brand. Up for review is the company's entry-level Mainstage drum kit.

Most of PDP's existing kits are aimed at attracting drummers ready to trade up to their second or even third kit. The Chinese made Mainstage kit would indicate a desire on PDP's part to grab customers the moment they pick up the sticks for the first time. Between them, PDP and DW ought to be able to cater for every subsequent stage of a drummer's career, so it makes sense to win them from the off.

The Mainstage contains everything, bar cymbals, needed to start playing. A single shellpack is available and is made up of 22"x18" bass drum, 14"x5" snare, 10"x8" and 12"x9" toms and a 16"x14" floor tom. These sizes - particularly the depths - reflect current kit trends exactly, making an immediate positive impression.

A choice of two wrapped finishes - Black Metallic and Bronze Metallic - provides the only decision-making point for the kit. By chance, the review kit was accidentally sent out with examples of both colours - the snare being Black wrapped while the rest of the kit is Bronze. Both wraps look and feel up to scratch and reflect highlights within the finely-grained sparkle pattern.

The shells are 7-ply and are made from poplar, an abundant hardwood that has featured in many drums over the years, often with impressive results. Bearing edges are cut at 45° with a slight back-cut and are well executed across the drums.

Instead of the familiar PDP oval lugs the drums are fitted with a new design of low-mass lug. Along with the hoops and some of the brackets, the lugs are black-coated. Obvious cost implications prevent this feature from being carried comprehensively over the kit, with the tension rods standing out in particular, but the black elements do add visual sophistication.

A hardware pack consisting of bass drum pedal, hi-hat stand, snare stand, straight and boom cymbal stands and a stool is supplied with the kit. Most of the stands are sourced from PDP's 700 Series. They are fairly compact models but are all double-braced and contain pro-style details such as a disappearing boom arm.

Also included is an entertaining instructional DVD presented by Stephen Perkins, who puts in a star turn.

The drums are shod with a full set of Chinese-made Remo UK heads. While not being of quite the same standard as Remo's US-made counterparts they are vastly superior to the gossamer-thin unbranded heads sometimes found at this level.

Also included is a muffling pillow for the bass drum, which, when attached with supplied self-adhesive strips of Velcro, just touches the batter and resonant heads. This feature makes setting up the bass drum for the first time and extracting a decent tone from it refreshingly simple.

Considering its contemporary dimensions, it's no surprise to find that it delivers a big sound. The presence of the pillow rids it of any overtones and also ensures that the note doesn't linger. Poplar is often compared with birch and this drum punches through in the manner of a (substantially pricier) birch drum.

This attacking edge is equally present in the toms. Their fast sizes ensure quick responses whilst also enabling hassle-free tuning. Swapping the supplied clear UK heads for American coated Ambassadors smoothed out some of the aggression, adding warmth to the equation. Fitting twin-ply heads influenced the sound further, encouraging fatter and deeper notes all round.

The snare outperforms its budget status comprehensively. It's a sweet-sounding drum; crisp, articulate and wonderfully responsive. Unwanted buzzes or pings are notable for their absence, while rimshots are served up with an authentic metallic tang. At 5" deep it's never going to produce a stadium snare sound, but within its optimum tuning range we couldn't find anything in its performance worth criticising.