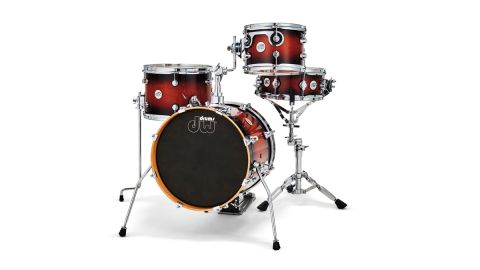 With excellent build quality and playability, the Mini Pro has everything that you might expect from a top-end DW kit, except of course the dimensions!

Since the popularity of Sonor's Jungle Kit in the 1990s, there has been an ongoing demand for scaled-down kits.

In more recent years Ludwig released the Questlove signature BreakBeats kit, and now we see DW staking a claim with the high-spec Mini-Pro.

Originally designed as a high-end kit for children (yes, you did read that right), the Mini-Pro allegedly caused a bit of a stir among DW artists and has been re-released as part of the Design Series. Aimed now, not just at the youngsters, but to more of a grown-up market.

The kit is also available in one other size option which incorporates a beefier 18"x14" bass drum and a slightly wider 13"x5" snare drum. Both configurations are offered in two available lacquer finishes: Black Satin or Tobacco Burst (as reviewed).

The basic shell pack is supplied with obvious essentials such as a rack tom mount for use with the drilled bass drum, extra long legs for the shallow floor tom, and low mass spurs and ratchet bass drum mount for the tiny 16" bass drum.

As you would expect from a mini-kit carrying a £1,269 price tag, quality can be found at just about each and every turn, particularly when it comes to craftsmanship.

This may be a shrunk-down DW, but the company's top bods have not let up on quality control at all. From the lacquer finish to the sturdy hardware, the Taiwanese- built Mini-Pro looks and feels beautifully well made.

One quick bone of contention, however, is that the kit has a toothed clamp design, which despite feeling more sturdy than alternative designs, does not offer the same convenience when positioning the rack tom. A small gripe, but one worth noting.

One piece of hardware for which the Mini-Pro does get full marks, however, is its baseplate. DW has opted for an adjustable ratchet mount here and right from the off it works without a hitch.

Now, onto the sound. The Mini-Pro is an absolute beauty to play all round. We also have the pleasure of taking this kit to a funk gig which suits it down to the ground. The kick drum could hardly be described as booming, but at a mere 16", it still packs a surprising punch.

With one of the provided dampening cushions inside the unported drum, it produces more of a focussed thud that had no issues in successfully cutting through the mix of the loud band. The toms have the ability to truly sing within a wide range of tunings.

Super-low tunings don't really do much to complement the small, shallow toms, but with a quarter-turn or two the toms really come into their own.

We must admit, though, the 13" floor tom is an absolute devil to tune. In a hurry we settle for the best we can get and the trusty Moongel comes to the rescue.

The cheeky little 12"x5" snare though is the crowning glory of this miniature kit. Once again, low tunings are not advised, however it's unlikely that anyone would want them from a kit of this nature.This snare is able to produce a healthy, balanced backbeat with a generous snare response, produced by the undersized 16-strand snare wires.

For our money though, crank this bad-boy up nice and tight for an awesome Steve Jordan-esque open yet short snap. It's so good it would certainly make a fantastic, main or side snare in its own right.

Overall, it is fair to say that tuning-up will bring the best out of these drums given their dimensions. They would be well-suited to hip-hop, electro, Latin and funk styles. The bass and toms are also able to sound convincingly jazzy when tuned up high, although of course are much more focused than that of a bebop-style kit.

As you may have guessed, we loved the Mini-Pro. Anyone in the market for a kit of this nature who has a few quid to spend should look no further than the DW Mini-Pro. After all, what's not to like about a kit that looks and sounds like a Collector's Series that has been hit with a shrink-ray?