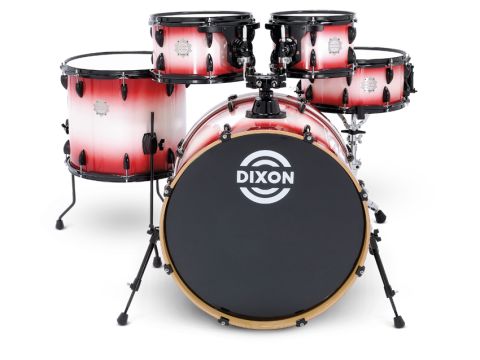 Dixon has got most aspects of it just right: a high overall standard of construction, quality all-maple shells, branded batter heads and sizes that are spot on for the target buyer.

Dixon's Predator series is a competitively priced all-maple kit from the renowned hardware company turned serious drum maker. It's the latest product from a brand aspiring to broaden its manufacturing horizons and market share into new areas.

While hardware has traditionally been Dixon's core product, over the years the company has dipped its toes into drum making waters producing affordable snare drums and also catering for the entry level sector in the '90s with its DX and Temp kits.

However, midway through the current decade Dixon decided to enter drum manufacturing in a much bigger way. Rather than targeting the mass-market areas straight off, Dixon's first 'proper' range of kits was its high-end Artisan series launched in Europe in 2004.

Artisan drums feature exotic woods such as bubinga, zebrawood and walnut along with the more conventional maple and birch.

Since the introduction of the Artisan series Dixon's drum line has expanded to a total of five ranges, four of which (including the Predator kit reviewed here) were launched together in 2008.

Below Artisan is the all-maple Outlaw series while the two cheapest Dixon offerings are the birch Chaos series followed by the birch/mahogany Demon series.

Sitting right in the middle of these ranges is the Predator series. The five ranges are available in virtually all territories except the USA, where only Chaos, Demon and Outlaw are marketed.

Although Dixon has created a substantial array of drum ranges covering all price points the Predator series currently consists of only one five-piece kit.

Three different finishes are available and the component drums that make up the kit can be ordered individually. Dixon will take custom orders for other sizes but no alternative off-the-shelf drums or kits are offered at the moment.

The three choices of finishes - Lava Red (as in the review kit), Metallic Brown Burst and Metallic Silver Burst are all lacquers. While the quality of the finish cannot be criticised, it's not unreasonable to point out that the colour scheme and depth of sparkle are not hugely imaginative by today's standards.

This is accentuated by the brushed metal Dixon badge found on each drum. Cutting the logo out of the badge to expose the finish behind ought to look sleek and modern. Unfortunately, here it just looks rather basic.

While it's best not to dwell on cosmetic details it's also worth remembering the importance of first impressions. Punters are only too capable of making snap decisions that mean they don't even bother sitting behind a kit.

Predator drums are built in Taiwan from North American maple. The shells are tidily made with well-cut 45 degree bearing edges. Dixon states that the drums all share a seven-ply construction, but my eyes counted an extra ply in the kick and snare drum shells. While the snare and toms are all 7mm thick, the bass drum shell is a fraction thicker overall at around 7.7mm.

The shells are dressed in black hardware as standard, meaning there's no alternative. Black fittings are increasingly popular and justifiably so as they can add great visual store to a kit.

For maximum impact the black coating has to be comprehensively applied to all the hardware. The fact that the Predator lugs and rims are black while the tension rods aren't is easy enough to live with; this is not uncommon among black-clad kits.

More noticeable are the many other small areas where the black coating is mysteriously absent. The most prominent of these omissions has to be the tom arms, which rise out of the black tom post like a pair of silver tusks.

Dotted all around the kit are other black-free oversights, including bolts, washers, tension rods and air holes. Again it seems cruel to carp on at what is a manufacturer's attempt to add a little pizzazz to a kit, but as the maxim goes, if you're going to do it, then do it properly.

The minor visual glitches are even more perplexing when considering the quality components Dixon has managed to include elsewhere on the kit. All of the drums wear genuine Evans batter heads and a Dunnet throw-off sits proudly on the snare. The two rack toms are equipped with RIMS-style suspension mounts while 3mm thick hoops are fitted across the drums.

In performance, the drums were quite impressive. The bass drum gave a satisfyingly deep thud, its EQ4 batter head affording it a dryish air that kept overtones at bay to the degree that no dampening was required.

At regular tensions the dryness meant that the beefy note didn't arrive with much presence at the top of the stroke. Slackening off the heads soon brought out a convincing slap that gave the drum a noticeable boost in the mix while still retaining its body.

The snare was, in the main, excellent, delivering a deep, fat crack that commandeered backbeats. The thick hoops imbued it with a metallic energy that was particularly noticeable when digging out rimshots.

Beneath the initial brightness sat the sort of dense clonk that only a wooden snare is capable of. Its 6 1/2" depth meant that at high tensions it still had real clout, while relaxing the tuning repositioned its sound somewhere in the region of massive.

Our only issue with the snare drum was with its very ordinary snare wires which were prone to unwanted and irritating buzzes. The very same wires were attached at one end to an expensive Dunnet throw-off. Very frustrating.

With such stubby depths, the toms would be expected to respond quickly and this proved to be true. Their coated Evans G1 heads meant that they were warm and natural rather than saturated, but they gave pleasantly ripe tones that decayed cleanly without being encroached by overtones. The floor tom was, predictably, a little more assertive in its voice, but not to the degree that it stood out.

There is no question that this is a lot of kit for the money. Not so long ago such a package would have been inconceivable at the price. In value and performance terms it deserves four stars.

It loses a star, however, for the visual lapses that make its appearance less convincing than its sound. That aside, the kit is proof of how serious Dixon is about making drums.