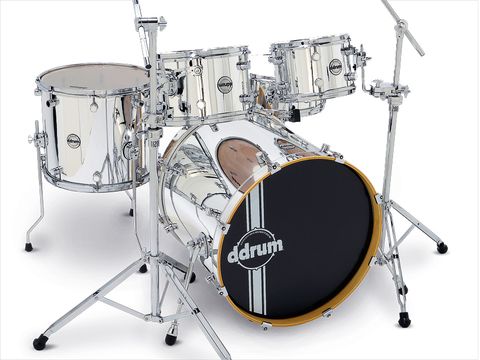 Heads issue aside, for what it is - a wrapped shellpack without stands - the kit seems expensive, particularly when compared to the non-Delmar ﬁnish options. At this price, the Delmar-wrapped Reﬂex is not just undercut by other brands, but bizarrely, by ddrum's own superior ranges.

The mid-range Reﬂex kit is the latest addition to ddrum's roster. Made in Taiwan, Reﬂex drums take the place of the now discontinued Duo Fade range in ddrum's catalogue, although ddrum is keen to stress that it's a brand new product rather than a replacement series.

After being launched at NAMM 2010, Reﬂex drum kits were initially rolled out in the USA before reaching the UK early this summer.

At the time of writing, supplies were still limited, to the extent that there were no examples of the four-piece shellpack in the country. Additional individual drums come in the shape of an 8" tom and 14" ﬂoor tom. ddrum devised a new shell for the Reﬂex Series, settling on alder after experimenting with a variety of woods.

A member of the birch family, alder is commonly used for smoking food. It has some history of musical applications, with the bodies of Fender Stratocaster and Telecasters - guitars renowned for their bright, sparkling tone - being made from alder. As a drum shell material, alder is reckoned to be fairly close to birch in character.

The shells are a mix of red alder and another, lighter-coloured alder with contrasting bands of colour marking out the different woods. Red alder is the inner ply on all of the drums and, as its name suggests, gives the shells a reddish tinge.

The ply count varies according to the relevant drum, with the bass drum and snare both having eight plies, while the toms and ﬂoor toms are six plies apiece. Bearing edges are cut at a fairly sharp 45 degrees, with a backcut intended to maximise head contact. The company's own Face-Off lugs are ﬁtted to the kit.

An existing ddrum design, they have until now only appeared on ddrum Signature drums, most notably Vinnie Paul's limited edition kit. They are compact, turret-like structures that stand almost 3cm proud of the shell. Despite obvious low-mass qualities (they are only 25mm in diameter) the lugs are ﬁxed to the shells with two small screws, which are located just inside the edge. This is because the centre of each lug houses a front-accessed thread that winds back into the body of the lug, towards the shell.

The thread is concealed by a removable metal disc (the Face in the lug's name). This type of lug design opens up a number of possibilities. On Vinnie Paul's kit for instance, metal spikes are screwed into the lugs and it's possible to customise the Reﬂex kit in this manner with accessories from ddrum, or indeed any object ﬁtted with the corresponding male thread pattern. Other uses include the well-proportioned rubber bungs that are attached to the four bass drum lugs nearest the bottom of the shell, ensuring that any contact that the drum has with the ground is cushioned.

The Face-Off lugs are also used to incorporate ddrum's new Tuned Sustain tom suspension mounts. By attaching directly to a pair of lugs, the mounts make a discreet presence, both visually and practically (especially handy as this means that changing a head can be accomplished without removing the drum from its stand).

The standard of the rest of the shell hardware is uniformly high, with the tension rods running smoothly, while the 2.3mm hoops, bass drum spurs and claws and various clamps all exude solidity.

Reﬂex kits are available in a choice of four colours, all of which are wraps. The review kit that you can see here comes in a Delmar-made chrome wrap, which is super-shiny and seemingly impervious to scratching. Greasy ﬁnger marks show up fairly easily though, so regular bufﬁng with a cloth might well be in order to keep it looking nice.

The most puzzling aspect of the Delmar wrap is the huge sum it adds to the cost of the kit, which makes the Chrome-wrapped Reﬂex more expensive than the equivalent all-maple, lacquer-ﬁnish ddrum Dominion Maple kit. In comparison, the three other wrap choices that come on the Reﬂex kit retail at between £200 and £300 less. we queried ddrum about these ﬁgures but was told that Delmar wraps simply cost more, which is something of an understatement…

The combination of the shells and hardware gives the drums a substantial feel - none more so than the bass drum, with its 20" depth. This huge length, coupled with the fact that it is undrilled, makes it as deep and loud a drum as you could wish for. Such depth also induces a natural dampening as the heads are so far apart. Engaging the pedal results in a colossal wallop of low end that is free of any overtones or unwanted ringing. The birch-like qualities of alder are in evidence too, with the drum's note having a distinctive presence

First impressions of the toms were of brightness and resonance. With both heads tuned to the same mid-range note they sang cleanly. Swapping the clear ddrum heads for branded single-ply coated versions calmed them a little, and gave them a more polished sound.Changing again for twin-ply batters increased the warmth and fatness further. The snare boasts high-end components in the form of a Dunnett snare release and butt end, yet surprisingly has only eight lugs.

It performed well, giving a sharp woody crack and rimshotting crisply.It's got a fair bit of grunt, and so is not really aimed at the quieter player. The level of sensitivity drops off in the last couple of centimetres into the edges. Here the snare wires still respond, but faintly, while the head sound remains at the same volume. It was least happy at the extremes of tunings, but in its preferred tuning range it delivered a more than acceptable performance.