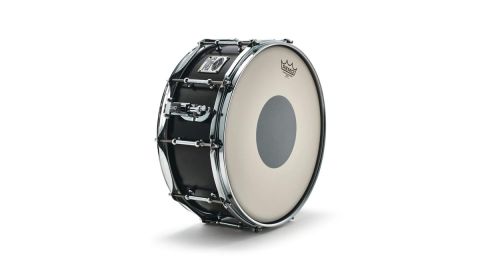 For such a young company, the overall quality of the De Broize product is of an exceptionally high standard, although it does come at a price. This drum not only sounds fantastic but has heaps of character both visually and sonically.

As part of a green initiative, De Broize Custom Drums uses only recycled (or more accurately upcycled) materials in its shell construction. From reclaimed floorboards to 100-year-old oak furniture, each and every snare can boast a unique origin.

Our review snare was once a beech cabinet, circa 1980, which has now been wonderfully transformed into a mighty 14"x6" stave shell. The inside of the shell shows off the natural pale beech colour while the outside has been stained black and waxed to a stylish matt finish. The drum is completed with triple-flanged hoops, vintage style tube lugs and a classic throw-off.

The snare has also been supplied with USA made Remo heads; Controlled Sound on the batter side and an Ambassador on the snare side. Overall, the build quality is highly-commendable, although there are a few small imperfections. We spotted a slight raise in one section on the back-cut of the bearing edges and, most notably, a small section that’s filled with glue where one of the staves has a small slither missing.

Despite these observations, the shell is rock-solid and feels like it will stand the test of time as much as a snare drum as it did a cabinet.

Tonally, the snare drum sounds absolutely magnificent. The thick beech shell brings an explosive power, which responds rapidly to each stroke. Combined with the Controlled Sound Remo head, the overall sound is fairly dry but there is still plenty of resonance to support the drum’s barking attack, helped enormously by the impressive wire response. This allows the snare to be beautifully articulate yet also face-snappingly loud.

With a respectable tuning range, the 14"x6" drum plays as well with little tension as it does cranked to its limits. With both heads tuned-up table top tight, the drum’s penetrating rim-shots would have no problem punching their way through wall-to-wall guitar amps - this drum is a real powerhouse.