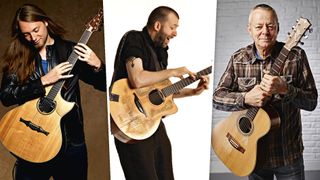 First up, voted the top acoustic guitar hero of all time by MusicRadar users and one of only five guitarists anointed as 'Certified Guitar Players' by his hero Chet Atkins, Tommy Emmanuel is widely regarded as one of the instrument's greatest players. Joining Tommy is Jon Gomm, one of the world's foremost percussive guitarists, famed for his accomplished catalogue of original music, as well as stellar interpretations of classic songs.

Rounding out the judging trio is fingerstyle virtuoso Mike Dawes. Mike became a household name among guitarists after his solo guitar arrangement of Metallica's One went viral last year. As a result, he ended up being voted 2017's best acoustic guitarist in the world.

Acoustic Guitarist of the Year 2018

How to enter and how to win

Finalists will be selected by our panel of star judges and industry experts, with the finals taking place live on stage at the UK Guitar Show in London on 29 September, tying in perfectly with World Guitar Day 2018!

In addition to the prestigious title, winners will walk away with an exclusive prize haul from the biggest names in guitar.

Entering the competition is easy: simply upload a video of your playing to YouTube and fill out the entry form below.

The Guitarist of the Year team and judges also want to know about the person behind the playing; tell us where you're from, what drew you to the guitar, what styles you favour, the gear you use, and anything else that could make you stand out.

Our judges will be revealing their tips for success in the run-up to the show, but in the meantime, head over to our guide on how to enter and how to win.