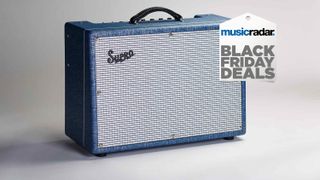 The Black Friday 2019 bargains bonanza is here and there are loads of amazing Black Friday guitar deals to be had. Sweetwater just released a load of top deals into the world, with a major highlight being this monster discount on the Supro 1650RT Royal Reverb guitar amplifier.

This amp comes fully loaded with tube-driven tremolo and spring reverb, and will look the part on any stage thanks to the trademark blue rhino hide tolex covering.

There's plenty of tone control to be had too. On-board you'll find independent treble and bass controls in the Royal Reverb's preamp, and a 3-way switchable power scheme enables guitarists to get a wide range of tones and textures.

Classic looks and sounds, all for under a grand? This Sweetwater Black Friday deal is not to be missed.

Get $500 off Supro's 1650RT Royal Reverb guitar amp
If you want power, style and classic tones in one affordable package, then this amp is for you. Killer features include tube-driven tremolo and spring reverb, plus Supro's ace blue rhino hide tolex covering.View Deal