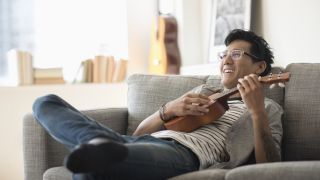 Why would you need a guide to the best ukuleles we hear you ask? Well, whether you're looking for a cheap, easy-to-learn instrument to keep you entertained over the coming months, something to add to your busking or live music setup, or a portable instrument to take on future travels, the ukulele has been growing massively in popularity with guitarists, young and old, as well as being the go-to for people who want to learn a stringed instrument.

Try these ukulele tunings and scales for beginners

And there’s no denying that the sound of a ukulele is enough to transport you to the Hawaiian beaches from where the instrument originated. Right now that sounds like a pretty amazing prospect.

In the UK, the uke has made its way into schools for use by school bands – a far cry from the humble recorder lessons of yore. In Canada, we're told, the ukulele has been a staple of music classes for decades.

Other than getting your head around the high 'G' on the lowest string, ukuleles are pretty straightforward for guitar players to pick up, and they're tuned in fifths as well. You can even get a 'guitalele', a 6-string uke that's strung A-A like a baritone guitar.

Become a uke master with 3 months of Fender Play for FREE
New to ukulele? Visit fender.com/playthrough to redeem your 3 months free code for access to amazing uke lessons. Once you have your code you can download the app via Google Play or the App Store and sign into your account. You can also sign into Fender Play via web/desktop.View Deal

What is the best ukulele to buy right now?

If money is no object, there's no reason not to splash out on the Martin T1K Tenor ukulele. Although there are pricier models out there, this represents the best sounding uke we've tried that's not rare, vintage, or a custom order. If the ukulele is your main instrument, then perhaps it’s worth spending more, but for most players the benefits above this price will be marginal enough that you probably won't hear or feel them.

If you're looking for a little ukulele jam with at home, or to take to festivals, strum in the park, or learn on, then there's one ukulele on this list with the right mix of low cost and fun. Our choice is the Mahalo. In particular we love the 'flying V' variant. So long as you don't take yourself too seriously, this is an inexpensive and ice-breaking way to get started with the ukulele. It would also make a great gift for guitarists who don't already own one.

How to buy the best ukulele for you

When it comes to ukuleles, the main things to consider are the construction, the voicing or range, and the neck feel. It's also generally worth noting whether or not the uke is in re-entrant tuning. Electric ukes, and deeper voiced models like baritones are often strung with a low 'G', rather than the more common high 'G'.

Voicing
The voicing of ukes is radically different too. The most common is soprano, the highest. Then there's concert, followed by tenor and baritone. By the time you get down to baritones, the voicing is not dissimilar to a half-size guitar, especially if it's steel strung.

Though there are many things that change the sound and feel of a ukulele, including body size, string type and whether or not it's in re-entrant tuning, voicing is the most important variable to consider when choosing the best ukulele for you.

These are the best ukuleles to buy right now

The best ukulele for summer-y strumming

View at Andertons
Check Plugin Boutique
Check Thomann
See all prices (4 found)
Cheap...
...and cheerful
Serious players will outgrow it
Designs might not be for everyone

Whether it's stuffed on a friend's bookshelf or above the bar at a Hawaiian-themed club, if you've seen a uke somewhere, chances are it's a Mahalo. The basic models won't set the world on fire, but they're durable, hold their tuning okay, and sound fairly decent.

If you have the additional cash, then you'll notice a big difference stepping up to the Fender and Kala models on this list, but if not, this is an excellent ukulele for beginners.

With a range of designs, from printed patterns on a traditional-shaped body, to 'flying V' ukes, and everything in between, there's probably a version of this uke to suit your personality.

For those who care about tone

If the pickup on the Grace VanderWaal isn't of interest, but the regular Zuma is well within your price bracket, then the Kala Mahogany could be worth the additional outlay.

The Kala doesn't go in for bells and whistles; rather it's a solid instrument from a company with decent form. A very noticeable step up from the rung above entry-level ukuleles, the Kala is more than enough for most uke players to play at home, or go out and play with others and never feel short-changed.

The mahogany construction offers a darker tone, which complements its concert voicing, and a subtle body binding adds to the good looks.

A uke for life

Though we've selected the tenor variant here due to its rich, full range, Martin also makes a concert variation of this excellent ukulele design. There's no soprano version, but Martin does produce the S1, which has an all-mahogany construction perhaps better suited to the higher range of that instrument.

Well-known for their fantastic range of high-end acoustic guitars, it's no surprise that a Martin should be the top of the pile. While there are more expensive ukes from both Martin and other manufacturers around, for most people the T1K will be more than good enough, and should last a lifetime.

The best ukulele if you care about looks

With a stylish finish like the Grace VanderWaal signature, the Fender Venice is a smashing option if you're looking for the plunk of a soprano uke, but don't mind paying a little more than the entry-level price bracket.

The surf green option brings to mind iconic Fender solid-body electric guitars and is likely to be a talking point even if it's just hanging on the wall. As for how it plays, it benefits from a slim 'C' neck to aid comfort, even if it's not quite in the same league as the Taylors and Martins of this world.

The best ukulele for guitarists

If you've always wanted a guitar but are unsure about the size of a three-quarters, or even half-sized axe, then a guitalele could be for you. Alternatively, if you're already a guitar player and you can't say goodbye to those two extra strings, then this could be a gateway to the uke.

Released by Yamaha a decade before the current uke boom, they're only just now becoming more widely available. Tuned to A, and without the re-entrant 'G', it really does sit perfectly half-way between guitar and uke, hence the name.

In terms of voicing, it's in the ballpark of a baritone, resulting in thick tones, with a better bass end than most ukes.

The best ukulele if you want to record

Originally designed as a way of increasing the volume of an acoustic guitar to compete with the cacophony of a dance band, the resonator enjoyed a relatively short spell in the sun before being made obsolete by the arrival of the electric guitar.

Resonators have a very distinctive, sharp sound, and one that records well - so although a soprano resonator would perhaps be too harsh, a concert resonator uke makes a lot of sense, and the Ashbury sounds fantastic.

It's worth noting that although resonators are less common, other models do exist – Gretsch also makes one, as do Kala, although the Kala is voiced as a tenor rather than concert uke.

For uke players that want to gig

For an electro-acoustic uke that doesn't compromise on quality but is still relatively affordable, it's hard to do better than this signature beast. With a Fender headstock modeled on the Telecaster and a Fishman pickup, this uke not only sounds good unplugged, but can be run through a PA or amp for gigs.

Fender also make a variant without the pickup, but the addition of the Fishman elevates this from a decent ukulele to a perfect all-rounder. There's a good chance even a serious player would never need another uke.

The best ukulele for rockers

Though electric ukuleles are relatively uncommon, they do exist at a variety of price points. At the bottom end, you'll find most options will be piezoelectric, probably with nylon strings and a not hugely inspiring tone.

Risa’s ukes start with their unusual-looking travel stick uke, and progress up to some gorgeous Tele, Strat, and Les Paul inspired instruments, all with regular electromagnetic pickups. This tenor version in sunburst is not only visually stunning but also has essentially the same wiring as a full-fat Les Paul, resulting in the tonal versatility of two humbucking pickups.

It comes set up without the re-entrant 'G', instead opting for the lower octave, which will be more familiar to guitarists.